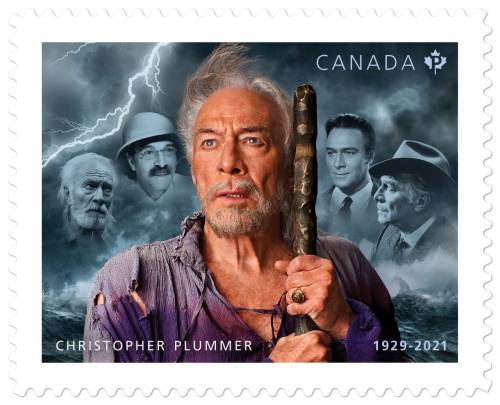 The Crown corporation says the Toronto-born stage and screen star played a leading role in selecting the stamp design before he died at his Weston, Conn., home in February at age 91.

The stamp features illustrations of Plummer in several prominent roles from his 70-year career.

In the foreground he appears as Prospero in a Stratford Festival production of The Tempest.

In the new commemorative stamp, Plummer appears as Prospero in a Stratford Festival production of The Tempest. (Canada Post)

The background includes depictions of four other roles: King Lear in a stage production of King Lear, Rudyard Kipling in the 1975 adventure feature The Man Who Would Be King, Capt. Georg von Trapp in the 1965 musical film The Sound of Music and John Barrymore in the play Barrymore.

Canada Post says it first approached Plummer about creating a stamp in 2019 and he was thrilled with the idea. He consulted along the way.

Plummer's dancer/actress widow, Elaine Taylor Plummer, was among those at a Toronto press conference Wednesday as details were revealed.

Stephen Slipp designed the stamp and Spooky Pooka did the illustrations.

Plummer appeared in more than 200 screen projects and performed on stages around the world.

His honours included two Emmys, two Tonys and an Academy Award for his supporting role in Beginners.

Previous : William Shatner tells Jeff Bezos: ‘Everybody in the world needs to do this’
Next : Coronavirus daily cases at highest for 12 weeks as 42,776 more infections recorded