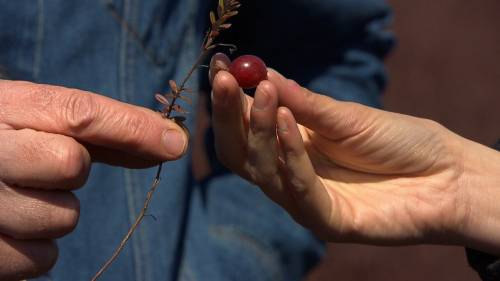 Cranberry farmer Luc Decubber has finally found enough honey bees to pollinate his vines this year. It wasn't a simple feat, he said, and it's one he worries could become even harder to achieve in years to come.

"We're talking with the beekeepers and they say [they] have a lot of deaths during the winter, and especially this year," he said.

The beekeeper who usually rents to Decubber expects to lose about half of his hives this year.

"If there's not an animal or someone to pollinate [the flowers], we will have no fruit," said the former banker, who now devotes all his time to his farm of about 160 hectares.

Quebec cranberry farmer Luc Decubber picks up a cranberry that was left on a vine over the winter. The plants start flowering in June, and the tangy berries will be ready for picking in October. (CBC)

The farm, which is located in Saint-Louis-de-Blandford, Que., a small town about two hours northeast of Montreal, used to rely on native pollinators when it started nearly 30 years ago.

But there aren't enough native pollinators to cover the farm's expanding footprint anymore, so like many other fruit producers, Decubber has been forced to rent honey bees to pollinate the small white flowers that eventually turn into cranberries.

Every summer, he rents some 1,000 hives, which he sets up around the bogs where the cranberries grow.

The region where Decubber is located is sometimes referred to as Canada's cranberry capital, and is one of the largest producers of the fruit in the world.

Thanks to Quebec bogs, Canada is the second largest cranberry producer in the world

The industry brings in hundreds of millions of dollars and provides hundreds of jobs. But if the bee population keeps declining, it could be in peril. 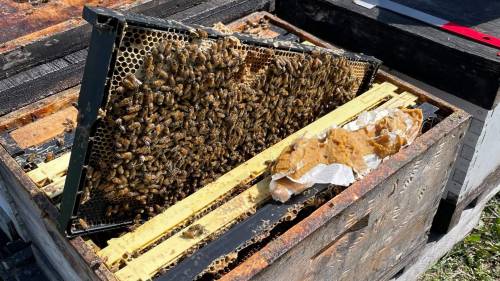 "If we have no bees, I don't think we're going to survive," said Decubber. "We absolutely need them."

Honey bees are crucial for agriculture in Canada, he said. "About a third of the food that we eat, and it's the most nutritious and delicious component of our diet, is pollinated by bees."

But in the past few years, it's been more difficult for farmers like Decubber to find hives to rent.

Honey bee losses have gone up since about 2007, according to Kelly. It's a trend that worries Decubber.

"It will have an impact, you see already this year it was difficult to get the hives that we need," said the cranberry farmer. 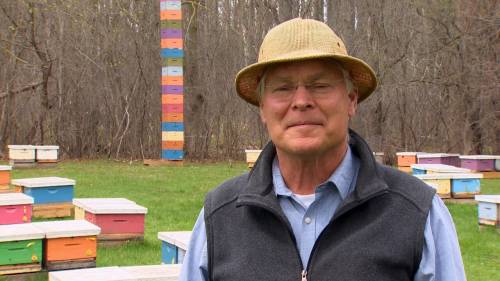 Paul Kelly said honey bees are very important for agriculture because they fly from flower to flower, pollinating the fruits and vegetable plants along the way so they can produce crops. (CBC)

Decubber said cranberry farmers will have to find alternative solutions, such as using bumble bees. But even that is not ideal because bumble bee hives have significantly fewer bees than honey bee hives, he said.

One long-term solution Decubber is working on is trying to attract natural pollinators back by planting indigenous bushes around the cranberry bogs.

But in the short term, Kelly expects fruit and vegetable producers will see a shortage because so many beekeepers lost their bees this year.

He said those beekeepers will have to borrow hives from other producers to meet the demand.

"It's gonna be a big challenge for the beekeeping industry and it could affect the pollination service as well," he said.

Devastating winter for many beekeepers 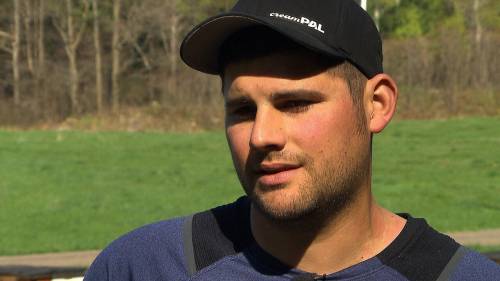 Quebec beekeeper Sébastien Laberge lost 70 per cent of his bees over the winter. (CBC)

Sébastien Laberge is a third-generation beekeeper and honey producer who runs La Miellerie St-Stanislas with his family in Saint-Stanislas-de-Kostka, Que., about an hour southwest of Montreal.

Laberge lost 70 per cent of his bees over the winter. That has been devastating for his business because half of his revenues come from renting out his bees to blueberry, apple and vegetable farms for pollination.

"We get calls every day for either blueberry, cranberry. We just don't have any bees right now to contract out," he said.

Laberge is not the only beekeeper feeling the sting this season. Many other bee producers in the province, and Canada, have found nasty surprises when they opened their hives this spring.

Varroa mites, a parasite that kills the bees, is suspected to be the main culprit behind the bee losses in the country this year.

Monoculture, the cultivation of a single crop, also weakens the bees' health because it provides them with only one nutrient source. 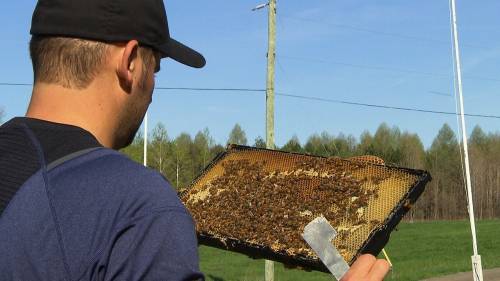 Quebec beekeeper Sébastien Laberge said his bees weren't killed by verroa mites and suspects environmental challenges to be behind their deaths. (CBC)

Laberge thinks other reasons may be contributing to their decline: pesticides, fungicides and climate change.

"It's a bunch of different environmental problems that probably killed our bees."

Laberge said he was lucky because he was able to secure bees imported from Australia to rebuild his hives.

But he estimates that in Quebec alone there will be a shortage of about 10,000 hives this year.

"At the end of the day we're all going to be on the losing end if nothing changes," he said.

Previous : Woman, 85, told she cannot have a new passport because her hair is ‘too white’
Next : Ryanair chaos as gran stopped from flying at airport despite having 3 months on passport