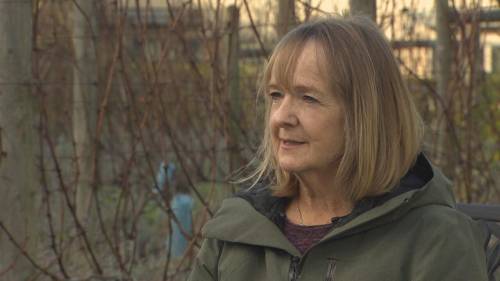 Marlane Jones thought she was doing the right thing by heading across the border to buy gas in the U.S.

Instead, her 10-minute trip ended with a $5,700 fine and scolding from Canadian agents at the Pacific Highway border crossing in Surrey, B.C.

"I was in tears. I was a bit frightened. I didn't know what was going to happen to me," said the 68-year old.

Jones said she decided to gas up in Blaine, Wash., after seeing the news about Ottawa approving an exemption allowing British Columbians from flood-affected areas to make short trips into the U.S. for gas or essentials without having to provide a negative PCR test for COVID-19.

The exemption was introduced to help ease supply shortages resulting from recent extreme rain that washed out highways and rail lines in southwest B.C., and was announced on Sunday by Minister of Emergency Preparedness Bill Blair.

But the border agents Jones dealt with on Monday had no knowledge of it.

Marlane Jones received a $5,700 fine upon returning to Canada from a 10-minute trip across the border to buy gas. (Jon Hernandez/CBC)

"[The agent] was quite stern and said I was violating the [Quarantine] Act because I didn't have the PCR test. I told her [the regulation] had been changed, but she wasn't buying it," said Jones.

Jones said, after being sent inside the border enforcement office, agents there gave her two options: accept the hefty fine or turn around and go back to Washington state for a PCR test and possible 72-hour wait for results.

"They also said I was the ninth person they had ticketed already early in the morning. I said they should maybe watch TV and see what we were being told."

On Tuesday, Blair admitted there was some confusion around the exemption.

"That direction was given to border services and clearly some clarification was required. But that's now been given," he said.

He said cases of those who were possibly fined in error were being reviewed by the Public Health Agency of Canada, which oversees quarantine violations.

Canada Border Services Agency (CBSA) said there can be a transition period that "may lead to some inconsistencies'' when operational guidelines are changed.

"We are working to ensure clear application of this at the border," CBSA said in a statement to CBC News.

Jones said it's surprising that border agents were unaware of the exemption, especially because it was widely covered by news organizations.

In the meantime, she's gone to the courthouse in Surrey to file a ticket dispute, and is hoping to hear the fine has been rescinded.

"No one has phoned me officially and told me my ticket has been bounced," she said. "I guess the proof will come when I go to pay my insurance in January."

CBSA is reminding people that the B.C. exemption does not apply to discretionary, non-essential travel.

"This means that travellers who enter the U.S. for the purposes of shopping for non-essential goods, or to eat at restaurants, visit friends or attend events, would be deemed discretionary and would not be exempt from the requirements for a molecular [PCR] test," the agency said.

With files from Jon Hernandez

Previous : Australia defence minister awarded $25,000 over defamatory six-word tweet
Next : Jamie Dimon sets his bank up to be China punchline