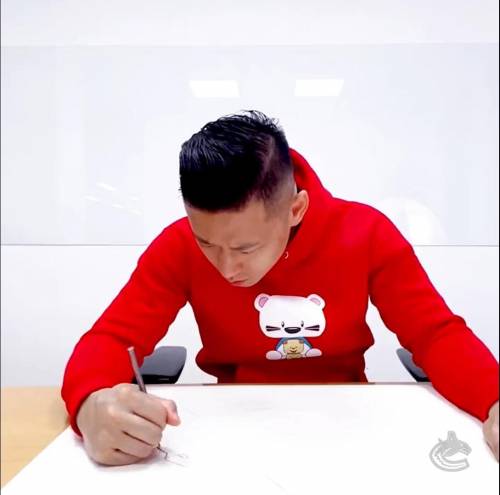 The designer of the Vancouver Canucks' special edition Lunar New Year jerseys says he hopes the bold redesign sends a message about inclusivity and anti-Asian racism.

Artist Trevor Lai, an animation director and founder of Up Studios, grew up in Vancouver. He had previously produced the animated series Super BOOMi for the NHL, which is now the family ambassador for the league in China.

His redesigned jersey is set to be worn by the team during warmups when they celebrate the Lunar New Year, which is on Feb. 1 this year.

The jersey features a tiger jumping out of water in place of the Canucks' traditional C-shaped orca logo. The tiger itself is a reference to the incoming Year of the Tiger in Chinese culture, with the jersey also featuring Chinese characters on the shoulder patches.

Artist Trevor Lai is seen redesigning the Canucks' orca logo into a tiger. According to Lai, he is the first artist in the team's 51-year history to redesign the orca logo. (Vancouver Canucks/Twitter)

According to Lai, who is now based in Shanghai, he is the first artist in the team's 51-year history to officially re-imagine the team's central logo.

"I came up with the idea of a tiger jumping out of water because normally the orca is breaking through ice," he told CBC News. "I thought what we are trying to push as a message is change."

"Because obviously, in addition to celebrating Lunar New Year, we're really trying to bring awareness to all of the increased inclusivity and anti-Asian activities and messages that we want to change."

The Canucks say some of the proceeds from the Lunar New Year merchandise will go towards Elimin8Hate, a local community organization advocating for racial equity and inclusivity for Asian Canadians. 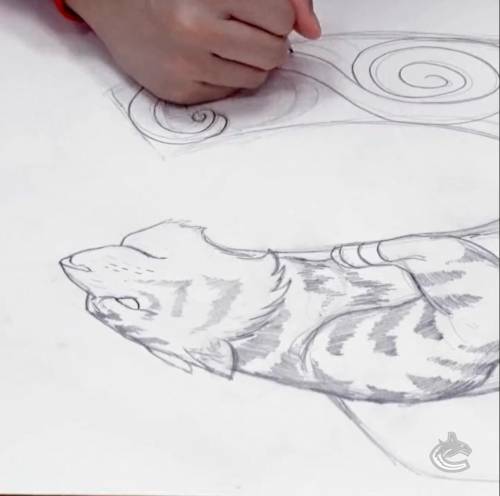 The tiger jumping out of the sea in the redesigned logo is a metaphor for change, according to Lai. (Vancouver Canucks/Twitter)

Vancouver in particular has seen a huge uptick in anti-Asian hate crimes over the past two years, with advocates saying the problem has been exacerbated by the COVID-19 pandemic.

"I think we need to unite together rather than hurt each other or take away from each other," Lai said. "I think that was part of the message and one of the reasons I was so passionate about working with the Canucks on this project."

"It's really about saying we are all Canucks. We are all fans, but we're also all a community together — the Chinese community, which has been very important, obviously, throughout the team's history."

The shoulder patches on Lai's special jersey celebrate the heart of the Chinese community in Vancouver — Chinatown, near the Downtown Eastside neighbourhood.

They feature the neighbourhood's iconic Millennium Gate with the Chinese characters that spell out the Canucks' name, 加人队.

"Each of those characters has great meaning," Lai said. "加 (jia) is actually the same character as 'Canada' in Chinese, and that represents, for me, diversity."

For Lai, who grew up playing street hockey in Vancouver, the opportunity to collaborate with the Canucks was a dream come true.

His cartoon, Super BOOMi, has also been seen by NHL stars like Elias Pettersson and Alexander Ovechkin, and has been viewed millions of times in China.

"Anything that you can imagine, you can make it come true. And I'm trying to be living proof of that," he said.

Lai says he hopes to work with the NHL and Canucks again in the future.

The team is set to wear the jerseys sometime in January when they celebrate the Lunar New Year, although no date was announced on Wednesday.

Previous : Lisa Nandy says levelling up country will be ‘key battleground’ at next general election
Next : Mystery illness leaves more than 150 dogs sick after coastline walks