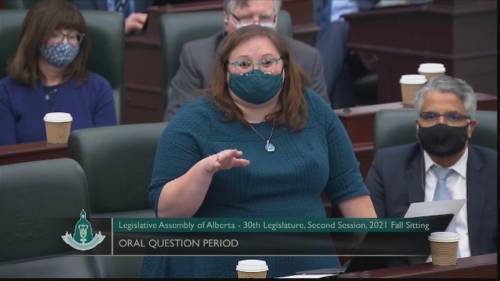 Alberta Health says it has received reports of at least 12 users who downloaded the wrong information from the province's COVID-19 vaccination record website on Wednesday. The record those users downloaded contained the name, date of birth and vaccine information. The government says no other information was leaked.

As of 7 p.m. Thursday the site was still offline. Alberta Health says an investigation is underway to determine the cause, and the number of Albertans affected.

The issue does not appear to be caused by a security breach to the system, the province says, and the Office of the Information and Privacy Commissioner has been notified.

Alberta Health Minister Jason Copping said he wants to apologize to Albertans who may have experienced issues accessing the updated vaccine record for travel.

"The government had months to plan and they continue to fail Alberta families," NDP MLA for Edmonton-Glenora, Sarah Hoffman said during question period in Edmonton Thursday, calling on Premier Jason Kenney to apologize for the "chaos" around vaccine passports.