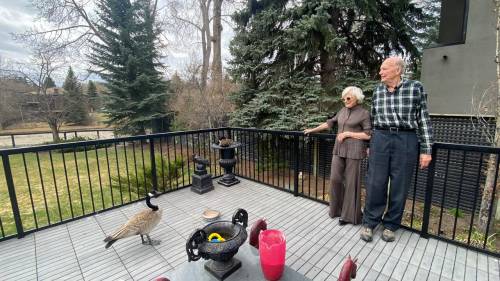 Many people wouldn't consider geese to be the friendliest of waterfowl.

But that hasn't stopped a Calgary couple in Elbow Park from befriending two of them, "dad goosey" and "mom goosey," according to Coco Cran. Her husband, Jamie Cran, prefers "Romeo and Juliet."

The couple said the pair of geese have returned to their backyard planter for three years running when it comes time to lay their eggs.

"I've never lived with birds like this, and I come and see at night if she's okay and when she's going to lay it, you know? It's very interesting stuff," Coco said in an interview with the Calgary Eyeopener's Elizabeth Withey.

The second goose is never far, said Coco and Jamie Cran. Apart from the odd hiss, they haven't had much trouble with the couple. (Elizabeth Withey/CBC)

It's not uncommon for geese to return to a spot when it comes time to nest, said executive director of the Alberta Institute for Wildlife Conservation, Holly Lillie.

"It didn't sound like the situation was one that they disliked," she said. 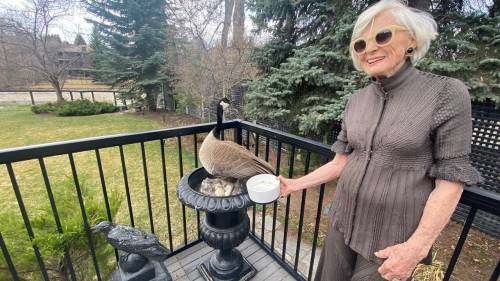 The Crans aren't too put off either. They provide the geese with some snacks, and some conversation, when they return every spring.

This year, the geese made their way back in early April, with mom goosey returning to her wrought iron throne. As of Thursday, she had four eggs.

Respecting wildlife in your backyard

Of course, not everyone wants to share their backyard with a pair of geese, and if that's the case, prevention is key.

Once the geese have nested, they're protected under the Migratory Birds Convention Act.

"So you do need to leave them alone at that point," Lillie said.

Geese prefer a spot close, but not too close to the water, Lillie said, and they like to have a little height to watch for potential predators. She recommends blocking off balconies in advance of the spring.

"They're very independent, and we just advise that people let the family do their thing," she said. 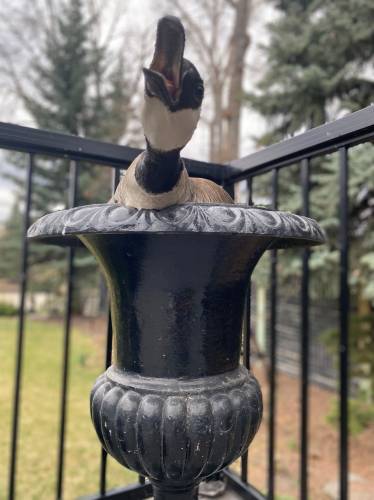 The female goose doesn't actually need to eat during that entire period, Lillie said, as she fattens up to prepare to nest.

"Leaving food or water out for the geese can actually just attract predators instead," she said.

"It's a personal decision, but we typically don't advise to feed [them]." 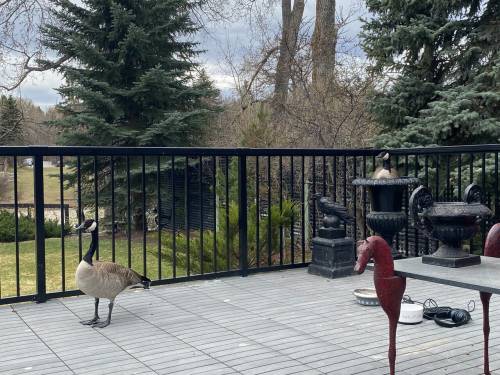 Geese lay up to 12 eggs in the spring, and they're incubated for about 25 to 30 days. (Elizabeth Withey/CBC)

When the goslings hatch, they'll already be able to walk and swim.

It's something the Cran's have prepared for in the past, laying down cushions to soften the fall when the goslings emerge from the planter.

After that, it's a bittersweet farewell.

"They all go on the river and off they go," Coco said.

"But then next year, they come again."

With files from Elizabeth Withey

Previous : Harry and Meghan ‘didn’t ask’ to be on balcony and only care that kids meet the Queen
Next : Logan Paul calls on Canelo Alvarez to fight brother Jake after surprise defeat