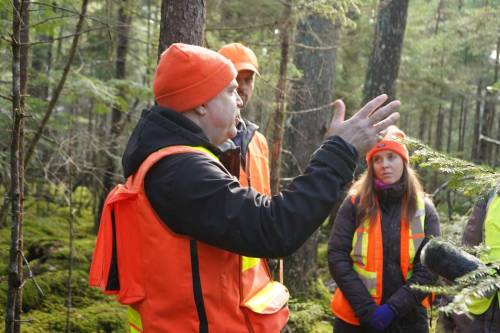 Nova Scotia only has a tiny fraction of old-growth forest left.

But thanks to research completed this summer, the province can lay claim to having the oldest tree on record in the Maritimes.

It's a 532-year-old eastern hemlock located in a stand not far from the South Panuke Wilderness Area, northwest of Hubbards.

The land used to be owned by the Bowater Mersey Paper Company. The province bought the parcel, along with many others, in 2012.

Peter Bush, left, manager of research at the Department of Natural Resources and Renewables, talks with forest researchers Brad Butt, centre, and Emily Woudstra during a recent site visit to the oldest tree in the Maritimes. (Steve Lawrence/CBC)

Brad Butt, a forest researcher, didn't believe it either until he had a closer look at the sample.

"Yeah, there is definitely some excitement there," said Butt. "You kind of … stop the clock for a minute and everybody had a pause to really have a look at it."

This increment core sample from an old eastern hemlock tree in Nova Scotia has been confirmed to have 532 tree rings. Many of the rings are very tight, some growing only two or three wood cells during certain years of its life. (Ben Phillips)

Woudstra counted the rings again to ensure the count was correct.

"[There] was kind of a buzz around the office and people kept asking if they could see the core sample, too."

To be certain about the tree's age, the province shipped the sample to Mount Allison University's Ben Phillips. Phillips is a dendrochronologist, or an expert in tree rings.

"This tree has 532 measurable tree rings," Phillips said during a recent video chat. "I measured every single one of them under a microscope to a thousandth of a millimetre.

"Some of those rings only had two to three cells in width."

A stand of provincially owned forest near Hubbards houses a 532-year-old eastern hemlock. The land used to be owned by the Bowater Mersey Paper Company. (Steve Lawrence/CBC)

The fact many of those rings were so closely spaced together is proof the tree grew very slowly. That made the wood exceedingly strong, according to Phillips.

He likened it to a commonly used building material.

"It has a lot of layers that makes it strong. Same thing with really old trees. When they have these little tiny tree rings, those rings are actually stronger."

Phillips found the last record holder as the oldest Maritime tree in 2005. That was a 465-year-old red spruce in Fundy National Park.

He's not upset that someone else now holds the record.

"Finding an old tree is amazing," he said. "The more old trees we have, the better"

Oldest tree not always the biggest

Those tight rings also tell a broader story about the stand where the ancient hemlock is located.

Peter Bush, manager of research at the Department of Natural Resources and Renewables, said the tree likely spent most of its life in the shade of larger trees, leading to the slow growth and resilience. It is sometimes why old trees are not the largest in any stand.

Bush is the manager of research at the Department of Natural Resources and Renewables for Nova Scotia. (Steve Lawrence/CBC)

"There are some larger hemlock beside it but this one is the oldest," he said during a recent visit to the site.

"We were surprised that it was the oldest, but in some aspects also not surprised because we have seen this in other forest communities that not always the biggest tree is the oldest tree."

Another remarkable fact is the trees in this old-growth stand appear to have escaped cutting or burning, and the elder statesman of this stand has withstood the worst of the elements.

"You think about the weather we get here," said Butt, "so to endure all that for 500 years is quite something."

It's research like this that has led the Nova Scotia government to revisit its old-growth forest policy.

Not everyone agrees what's being proposed offers enough protection, but the fact the province can now boast having the oldest tree in the region may bolster the argument there's something worth preserving.

As a research manager, Bush is certainly sold on continuing to protect this particular stand.