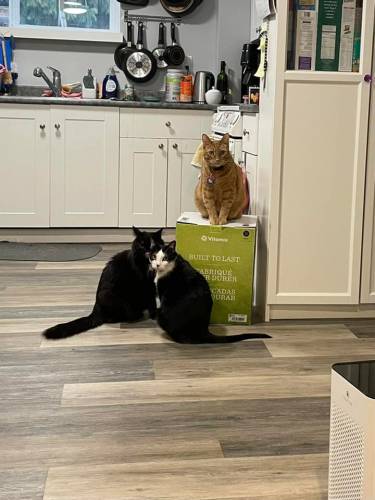 In a standoff that has lasted nearly a month, three cats based in Langford, in southern Vancouver Island, have tried to claim ownership of a blender box — a saga that has fascinated social media users worldwide.

It all started on Dec. 16, according to Nikii Gerson-Neeves, one of the trio's humans, when she brought in a new Vitamix blender and left the still-unopened, knee-high box on the kitchen floor.

Her four-year-old tuxedo cat, Max, immediately jumped on the box, bemusing Nikii's wife Jessica, who took a picture and uploaded it to a Facebook group that celebrates chunky cats.

By morning the situation had escalated: Max's two 13-year-old siblings, George (Destroyer of Worlds) and Lando Calrissian, had taken an interest in the Vitamix box, too. From there, Nikii says, things spiraled out of control.

"We're creeping up on a month. It has been just shy of a month, which is ridiculous," Jessica said.

It's a month that has seen the couple deprived of the blender as their three fluffballs, all rescue cats, take turns atop their box perch, and their Facebook page explode in popularity.

"When we started the page we have for the cats on Facebook … it had around 50 followers, something like that," Nikii said. "[Now] over 19,000 people follow the page."

Max, George and Lando have made their household famous, with stories of the cats' antics going beyond the shores of Vancouver Island.

"There are people commenting, 'Hey, from Italy!', 'We saw this on our news in Australia,'" Jessica said. "Like, what?"

"Someone sent us a post translated into Chinese the other day … it's everywhere," Nikii said.

"Cat videos go viral all the time, you just never expect it to be your cats."

George (Destroyer of Worlds) is seen occupying the blender box as his two siblings look dejected on the floor. (Jessica Gerson-Neeves)

After days of being deprived of their expensive blender, the couple hatched a plan to get the cats off their new throne: reach out to Vitamix and get some dummy boxes.

"We thought that they might get a kick out of how much the cats had fallen in love with this," Jessica said. "If they decided to … send along three empty boxes, great, it'll be a terrific laugh for everybody involved."

That's exactly what the company did.

The couple is now in the process of reinforcing the upcycled boxes so the three feline combatants don't fall through them — a disastrous outcome for the Gerson-Neeves' smoothie and soup plans.

"The second one of them falls through a decoy box … it's over," Jessica said. "Nobody's getting on anything other than the real box ever again." 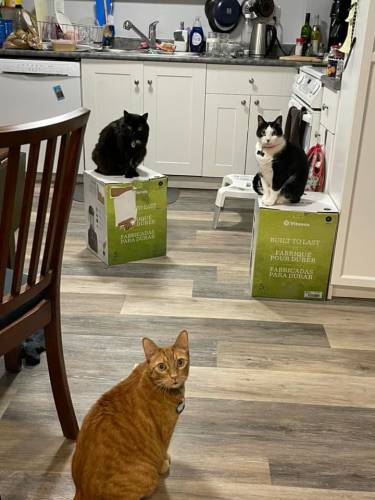 The couple now has a few decoy boxes to eventually try and wrangle their blender away from their three cats, but has only reinforced one so far, with Lando and Max occupying two other thrones. (Jessica Gerson-Neeves)

The battle over the Vitamix box has been a much-needed distraction amid the cycle of grim news in the province, according to the couple.

"Of course, we're not actually being held hostage, we can move the cats anytime we wanted," Jessica said. "This is about having something sweet and fun and whimsical and silly."

"There was a lady who said, 'I'm a COVID nurse in an ICU ward, and every day before I get out of the car to go into work, I read the latest post and I laugh.'" 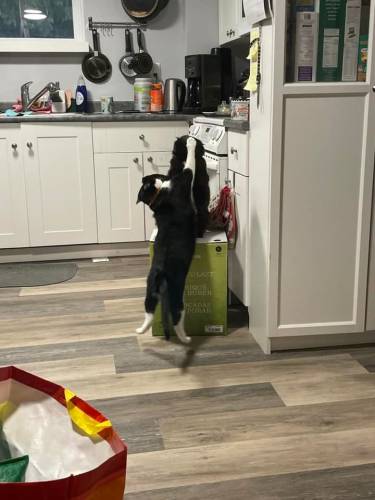 The month-long feud between the three cats has occasionally seen violence. Here, Max paws at Lando to try and get atop the Vitamix box. (Jessica Gerson-Neeves)

Jessica says she wants people to contribute to their local animal rescue and adopt their own cats if they can.

"It's not big and consequential. It's not traditionally newsworthy," Nikki added.

"It's not high stakes, but it's making people happy and that's not nothing."