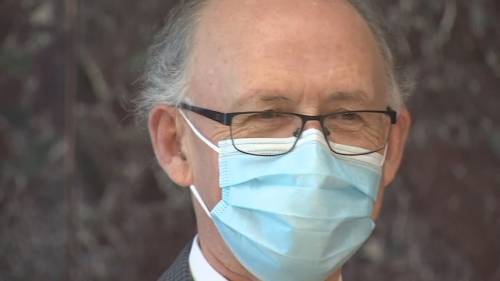 Nearly four years after an inquiry into the treatment of Innu children in the child protection system was announced, Newfoundland and Labrador's government has appointed commissioners to lead the inquiry.

The provincial government Thursday announced that Judge James Igloliorte, a former provincial court judge, will be chief commissioner for the Inquiry into the Treatment, Experiences and Outcomes of Innu in the Child Protection System.

Igloliorte is also leading a separate provincial inquiry into search and rescue operations.

He will be joined by Anastasia Qupee, former grand chief of the Innu Nation, and Mike Devine, a retired professor of social work at Memorial University.

At the announcement at Confederation Building, Innu Nation Grand Chief Etienne Rich said he is pleased that the inquiry is finally moving forward and that the Innu have been involved in developing the terms of reference and helping to select the commissioners.

Mike Devine, a retired professor of social work at Memorial University, will also be a commissioner for the inquiry. (Ted Dillon/CBC)

"Children are the future of this community and we need healthy families and children to build our nation. We have been reminded in the past several weeks about the horrors of the residential school system," Rich said.

"It is top of our minds that the residential school system and the child welfare system are linked and have similar effects, cause similar intergenerational traumas. We want to break this cycle."

Rich said too many youths have died by suicide in his community and children are still being unnecessarily removed from their homes, but the inquiry will allow the Innu to tell their stories.

We pledge to do our best.- James Igloliorte

Igloliorte said he and the other commissioners will examine how to help the Innu regain control over the welfare of their children.

"We want to be forward looking and play our part — the three of us — in giving recommendations that further the dreams of Innu self-government, underpinned by a strong foundation of facts that we learn about family life and what we will learn through all of this important work. We pledge to do our best," he said.

The inquiry will do the important work of addressing the legacies of trauma related to children in care, Qupee said. She said Innu families need answers to start healing. 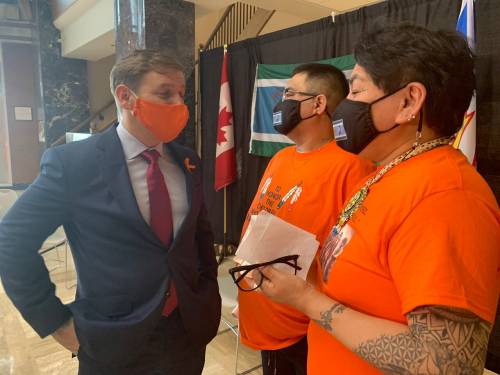 Mary Ann Nui (right) and Premier Andrew Furey speak after the announcement of the commissioners for the inquiry into Innu children in care Thursday. (Mark Quinn/CBC)

"I have three beautiful grandchildren. They're beautiful girls," Nui said, fighting back tears.

Premier Andrew Furey said the appointment of the commissioners is an important step.

"Through this process, we will acquire a better understanding of the treatment, experiences and care that Innu children have received in the current system, and more importantly, how we improve for the future," Furey said at the announcement.

"This is an important day. We worked hard to get here and the work ahead will be hard, it will be tough, but it is so important for the future of reconciliation and the Innu Nation in particular."

No date was given as to when the inquiry may begin, but Furey said some background work can now start to prepare for when Igloliorte completes his work on the search and rescue inquiry.

According to a statement from the province, $4.2 million from this year's budget has been allocated for the inquiry.

Inquiry years in the making

Calls for an inquiry were first led by then Innu Nation deputy grand chief Simeon Tshakapesh, whose 16-year-old son Thunderheart died by suicide in May 2017 after returning to Natuashish following treatment for addictions issues away from the community.

Innu leaders pushed for more of an effort to keep Indigenous children in care in Labrador, with treatment that includes a focus on their culture and roots.

A memorandum of understanding to hold an inquiry into the treatment of Innu children in care was signed July 5, 2017, with the aim to start the inquiry by Sept. 30 of that year.

That target was never met, and there has been little movement on the inquiry since it was announced. 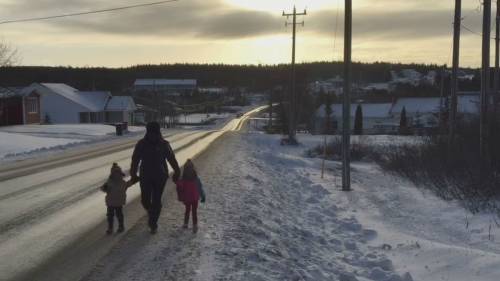 The federal government came on board as a "full participant" in 2018, and in November 2019, then premier Dwight Ball pointed the finger at the feds, saying it took time to get Ottawa on board to participate in the inquiry.

Last June, the Innu Nation again renewed calls for the inquiry after a 15-year-old boy from Natuashish who took his own life while in provincial care in a group home. The provincial government said at the time it expected the inquiry to begin some time in 2020.

Furey called the long wait for the inquiry "unacceptable," and has said it is a priority for his government.

With files from Mark Quinn