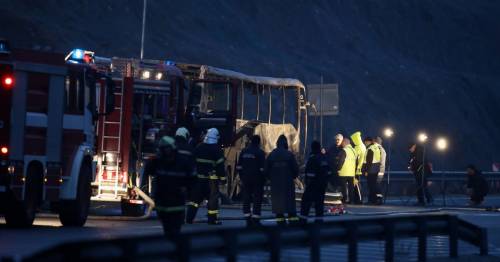 At least 46 people have been killed, including children, after a horror bus smash and fire on a highway in western Bulgaria, say officials.

As well as the victims of the tragedy seven people with burns were rushed to hospital in the capital Sofia, the head of the fire safety department at the interior ministry, Nikolai Nikolov, told private BTV television.

"At least 45 people were killed after a bus caught fire and crashed, or crashed and then caught fire," Nikolov said.

The accident happened around 2am, he added. The site of the accident is sealed off.

It has been reported that the flames erupted after the vehicle hit a guardrail but the cause of the tragedy has not yet been confirmed.

The tragedy happened in Bulgaria

None of the victims have yet been identified but reports claim that of those who died 12 were children.

There had been 53 people on board, who were mostly tourists from North Macedonia, before the accident which happened on Struma highway about 28 miles west of Sofia.

The area has been sealed off

"We do not know if all the passengers are our citizens, but we suspect so, as the bus has a Macedonian registration."

An official from Sofia emergency hospital said the seven people receiving treatment had jumped out of the burning bus.

Reporters at the scene of the crash
(

All were said to be in stable conditions.

Previous : UK weather forecast: Snow to fall ‘for days’ with temperatures set to plunge
Next : Kyle Rittenhouse insists he’s ‘not a racist’ in first interview after acquittal