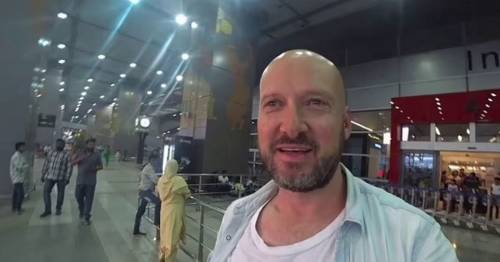 A British YouTuber has been arrested in Kazakhstan close to a rocket launch pad rented by Russia.

Benjamin Rich, who is known for visiting risky and remote destinations for his Bald and Bankrupt YouTube channel, has been arrested at the Baikonur Cosmodrome in Kazakhstan.

News of the arrest was announced by the head of Russia's space agency, Roscosmos.

In an online post Dmitry Rogozin wrote that Rich – who has 3.53 million followers – and a woman by the name of Alina Tseliupa were being held by one of the launch pads at Baikonur, which Russia rents from Kazakhstan.

Local authorities were determining "the exact level of participation in illegal activities" by the pair, said Rogozin, who posted photos of Rich's visa and Tseliupa's passport.

The Mirror understands UK officials are aware of the reports and an investigation is currently underway.

Authorities say they haven't been approached for assistance.

Some of Rich's videos feature a woman called Alina but it was not immediately clear whether she and Tseliupa were the same person.

The most recent video on Rich's channel was filmed in Syria and posted on April 24.

In an Instagram post last week, Rich said "Syrian suntan and back in a country with Soviet mosaics" but did not specify where he was.

The popular YouTuber posted one clip – which has now been viewed 10 million times – about a trip to Moldova entitled: "Nobody Visits This Country…Find Out Why."

In London, Britain's foreign ministry did not have an immediate comment.

Baikonur, once a closed Soviet city, is now open to tourists who apply for permission from Roscosmos.

It lies in the steppe around 1,100 km (680 miles) southwest of the Kazakh capital Nur-Sultan.

The city is located in Kazakhstan but is leased by Russia for around $115million per year, according to Caspian News.

It was built during the Soviet era – with the cosmodrome once serving as the point of launch for the bloc's satellites and manned space missions.

It comes less than a week after a Brit fighter held by pro-Russians was forced to read a humiliating confession on video the day after captives were threatened with the death penalty.

Andrew Hill, from Plymouth, was filmed admitting to "unwittingly" being involved in "war crimes" and pleading for leniency.

The 35-year-old is apparently being held in Donetsk in eastern Ukraine, which Russians forces occupied early in their offensive.

In the footage bearded Mr Hill, a father of four, can be seen seemingly reading a statement and occasionally stumbling over his words.

The Mirror is not publishing the video.