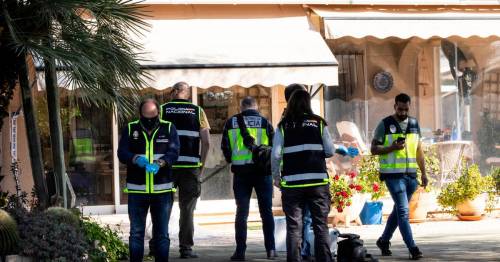 A British pensioner found dead at her Costa Blanca home could have been targeted over a real estate dispute, it emerged today.

They have pointed the finger at a 46-year-old mum they suspect shot the 81-year-old widow dead before allegedly getting her 16-year-old son to help her move the body and try to dispose of evidence.

Today, as the pair made their first court appearances after their arrests on Thursday, one local report said the unnamed mother and her alleged victim could have been involved in a property deal and the police were investigating a “financial motive” for the murder.

Detectives insist they are still working on trying to discover the motive and have not commented on the reports – but have ruled out the idea Wednesday's killing was the work of a violent opportunistic burglar who picked the Brit's house at random.

They confirmed yesterday they suspected the woman they arrested of being the one who killed Mrs Warren before accusing her and her son of moving the body and trying to clean up the crime scene.

They said they had honed in on the suspects after the mother’s car caught fire in Alicante in the early hours of Thursday morning, shortly after Mrs Warren’s bullet-riddled body was found at her home in Elche near Alicante.

She subsequently reported the theft of a .22 Beretta pistol, believed to be the murder weapon recovered near the house, that she was licensed to use as a firearms enthusiast.

A plumber Mrs Warren had called to her home to carry out an urgent repair, raised the alarm at roughly 7pm on Wednesday when he was unable to get her to answer the door.

He told a 999 operator he was concerned because he had seen two people wearing hoodies leaving the OAP’s home and driving off in a black Peugeot.

Police have said the car that caught fire on Thursday in a suspected arson was the same make and model as the one driven away from Mrs Warren’s home, and the detainees’ descriptions coincide with the ones the plumber gave them.

Overnight it was reported the female suspect only reported her gun missing after officers said they were going to check for fingerprints on the gutted Peugeot.

Court officials are expected to confirm later whether she has been placed under formal investigation for arson as part of a botched attempt to cover up Mrs Warren’s murder, as well as homicide and filing a false police report.

The investigation near Elche continues
(

She was taken to court in Alicante in a police van around 9.30am local time today, roughly two hours after her son had been driven into a car park under the same court building in a police car.

The pair were taken to court after police searched her nearby home in her presence yesterday seeking more evidence linking her to Wednesday evening’s shooting.

Her son was also taken to the property with his defence lawyer.

More weapons are understood to have been found in the family home, although police have already said the woman they arrested practiced target shooting as a hobby and had a weapons licence.

Police investigate at the villa of the Brit pensioner
(

The pair’s court hearings are taking place behind closed doors as is customary in Spain where only trials take place in public.
Court officials are expected to announce later today whether they have both been remanded in custody pending ongoing criminal probes.

Mrs Warren, who is thought to have been born in Germany but became a naturalised British citizen through marriage, moved to Spain with UK-born husband John more than 20 years ago.

He died of cancer several years ago and she lived alone.

Friend Alan Benson, 70, who lived near her £350,000 villa on a residential estate a short drive from Elche, told the Mirror he believed she had worked as a model in London.

He added: "She was tall but she was incredibly thin. You could knock her over with a feather."

Previous : West Indies legend Chris Gayle hits out at IPL over ‘lack of respect’ as he explains snub
Next : Woman who inherited 800-year-old castle says she’s not ‘spoilt’ because of all the bills