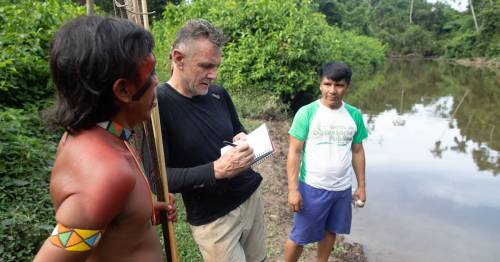 Brit journalist Dom Phillips’ death has been called “collateral damage” during a "drunken" attack on his travel partner Bruno Pereira, an indigenous expert, by Brazil’s vice-president.

The pair were reported missing on June 5 after travelling by boat through the Javari Valley, a remote region bordering Peru and Colombia and an extensive police search led to the discovery of their bodies ten days later.

Mr Phillips, a freelance reporter who had written for the Guardian and the Washington Post, was doing research for a book accompanied by Mr Pereira, a former senior official at the federal indigenous affairs agency Funai.

Police have said that they died using hunting ammunition and their brutal murders have shocked the world.

As the investigation continues with three people arrested, Brazil’s Vice-President Hamilton Mourao said he believes Mr Phillips died because he was with Mr Pereira who was the target of the killers.

Kamuu Dan Wapichana, from the Wapichana tribe, sings during a protest to demand justice for Dom Phillips and Bruno Pereira
(

“If someone ordered the crime, it’s a businessperson in the region who was feeling aggrieved, mainly by Bruno’s actions,” Mourao said.

“Not Dom’s. Dom got caught up in this story. He was collateral damage.

“This is a crime, it was something that happened in a moment, almost like an ambush. Something that had been brewing for a time, so to speak. In my assessment, it must have happened on Sunday. On Sunday, Saturday, folks drink, they get drunk – the same happens here in the poorer areas, in the outskirts of the big cities.”

Mourao, the vice-president to leader Jair Bolsonaro who initially was critical of Mr Phillips' decision to go into the area of the Amazon where he died, did not say whether his comments were based on evidence.

Jeferson da Silva Lima, a third suspect in the killings, as he arrives for a hearing in Atalaia do Norte
(

But he added that in Brazil's big cities "every weekend people are struck and killed by knives, by gunshots, in the most cowardly of manners, and normally this is a result of what? Alcohol. So that’s what must have happened there.”

His comments led to angry response from the Univaja organisation that represents indigenous people in Brazil, and where Mr Pereira was working.

It said that Mourao did not consider why Mr Pereira had been targeted – which was because he was standing up to illegal activities in the region.

Univaja stated: "The vice-president disregards the fact that the police investigation points to the existence of a criminal group organised to plunder the natural resources of the Vale do Javari Indigenous land."

The police investigation has now led to a fisherman who has confessed to being involved in the murders, taking part in a police reconstruction of the crime.

Broadcast footage shows police officers taking Amarildo da Costa Oliveira down the river where the murder took place and questioning him about what happened.

Costa said that Mr Phillips and Mr Pereira had argued with Jeferson da Silva Lima, also a fisherman, who had clashed with Mr Pereira over his efforts to combat illegal fishing.

Mr Pereira fought back after being shot at, Costa said, and he gave details about how the bodies were disposed.

The investigation by police is ongoing.

Previous : Psychotic seagull ‘stalking’ man leaving him soaked in blood and a hostage in own home
Next : Boris Johnson’s Rwanda showdown with Charles – as by-election danger mounts back home