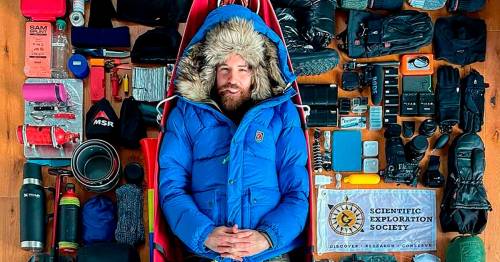 A British adventurer exploring the Arctic in Russia has been accused of 'spying on Vladimir Putin's military assets.'

Appearing on TV in Siberia in handcuffs, Charlie Walker has been arrested, fined, and threatened with being kicked out of Russia.

When asked about the Russia Ukraine war, Walker said: "I don't really know much about it. I've been in Russia for a long time.

“I arrived here before the special [military] operation and was without the [internet] connection, in the wilderness.

“I had no television, no internet access, that is why I do not have an opinion. I'm not into politics."

Mr Walker calls himself an “explorer, writer and public speaker from the UK”.

But a TV report in remote Yakutia region said that “under the disguise of a tourist Charlie was gathering economic and political information”.

Yakutia 24 channel said that "the British man interviewed local residents asking provocative questions about the special operation in Ukraine, not hiding his negative attitude to the actions of Russian authorities."

Two Tiksi residents were interviewed to highlight his supposed crimes.

The British explorer was detained and fined
(

Petr Trofimov said: "He asked about military equipment, why there are so many service personnel in Tiksi.

“He also spoke negatively about Ukraine."

Another local Svetlana Sidorova said: "He expressed his attitude towards the military operation in Ukraine, for example that the Russian leadership is to blame, and that they provide false information to the people."

Despite this, Walker was not accused of espionage and will be deported from Russia.

After being detained in Tiksi, the explorer was moved to regional capital Yakutsk to a deportation centre.

Walker had travelled from the world’s coldest city Yakutsk to Bateau on March 2, one week after the start if hostilities.

He is accused of taking pictures of defence ministry facilities in Tiksi, one of the world’s loneliest outposts.

Walker was fined £57 and banned from returning for five years
(

The town is part of Putin's drive to boost his military presence in the Arctic.

Walker was fined £57 by Bulunsky district court and will be deported. He is banned from returning for five years.

In 12 years, Walker has travelled to” the Tibetan plateau, the Mongolian steppe, the Congolese jungle, Arctic tundra, the highlands of New Guinea and numerous deserts in between”.

One Tiksi resident said he spoke negatively about Ukraine
(

He has travelled more than 50,000 miles by bicycle, foot, horse, raft, ski and dugout canoe, and is a Fellow of the Royal Geographical Society, and a 2021 Scientific Exploration Society Explorer Award winner,

His trips have been featured on the BBC, a number of newspapers and Geographical magazine.

Russians prepared to watch the annual Victory Day military parade at Red Square on Monday, presided over by Vladimir Putin.

The explorer is to be expelled from Russia
(

In a major hack of Russian TV schedules, millions saw an anti-war message that is officially banned from screens.

A caption appeared on hacked screens saying: “The blood of thousands of Ukrainians and hundreds of their children is on your hands. TV and the authorities lie. No to war.”

The hack impacted online viewers of various channels transmitted by MTS mobile operator, NTV Plus, Rostelecom and Wink, and hit viewers all over Russia.

Previous : Lewis Hamilton hits out at Mercedes and tells team to “do their job” in Miami GP rant
Next : Todd Boehly and the eight other key figures in new Chelsea owners’ group