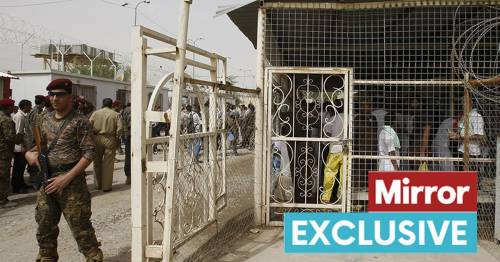 The British dad-of-two locked up in Iraq for smuggling ancient artefacts has been sent to an infamous jail where inmates have been tortured to death.

Retired geologist Jim Fitton, 66, was in the Middle Eastern country on an archaeology tour when a guide told him to pick up fragments on a hillside "as souvenirs".

The "loving retiree" was arrested alongside a German national – who was acquitted as Jim was sentenced to 15 years.

An inside source has told The Mirror that after the verdict, Jim was sent to Al-Rusafa prison in central Baghdad – where jailors dole out cruel and unusual punishment for the "love of torture and revenge".

At a press conference earlier this week, Leila Fitton said she's "terrified" about how her beloved dad Jim is coping with his prison sentence in Iraq
(

According to a 2021 report, Al Rusafa is one of three prisons in Iraq with the highest number "victims who die as a result of torture".

Mustafa Saadoon, Director of the Iraqi Observatory of Human Rights, told The Mirror "officers, jailers and interrogators practice torture extensively" in the complex – which is made up of several smaller prisons.

Mr Saadoon said human rights activists are not allowed access to record the full extent of the horrors inside.

But his organisation has received testimonials of men and women subjected to horrendous abuses, Mr Saadoon explained.

According to Palestinian publication AlQuds Al-Arabi, data from medical sources showed a "significant number" of the 60 victims that died in Iraq's prison as a result of torture in 2021 showed signs of "excessive beating".

An Iraqi soldier stands guard in front of prisoners waiting to be released from Al-Rusafa detention facility in Baghdad on April 29, 2010
(

These included bruises and contusions on the "flank areas, genitals, lower back, fractures in the cervical vertebrae".

Some victims were found to have died as a result of food poisoning, a condition easily treated with medication, the report claimed, citing the AFAD Observatory for the defense of human rights.

Five dead prisoners from other Iraqi facilities showed signs of severe internal bleeding and required autopsies to determine the cause.

The report claimed investigations were halted after the victim's families were intimidated.

Leila and her partner, Sam Tasker, speaking on BBC Breakfast on June 8
(

The abuses are not limited just to post-trial detention facilities as "horrific cases of torture, forced confessions" and other threats take place before defendants even step in court.

The techniques include threats "to raid their relatives' homes, and the "arrest of women if no confessions was made".

One prison constructed recently to modern standards was built with "hooks, lifting rings and chains" of the interrogation rooms – which suggests it was a "regular approach" by officers, the report adds.

Abuses in the Iraqi prison system are rife, according to human rights groups
(

"We receive many testimonies about torture in prisons, but the authorities are silent on the matter and do not help us hold those who commit torture to account.

"In the prisons in Baghdad, there is torture, especially in Al-Rusafa prison.

"Some of the torture operations are for sectarian or ethnic reasons, or perhaps because of the love of torture and revenge that some of the warders have."

At a press conference earlier this week, Jim's daughter Leila Fitton explained how the family is being kept in the dark about the "loving retiree" and the conditions he's living in.

Mr Fitton with his wife and two children Joshua and Leila
(

Ms Fitton said: "We have no knowledge of the conditions he faces and are terrified as to what he must be going through on a daily basis.

"My heart drops every time the phone rings.

"My father is not a criminal, he is a loving retiree who just wants to spend the years he has left reading books, enjoying nature and spending time with his family.

"He had no criminal intent and indeed did not know what he was doing was a crime.

The family has complained that there has been a lack of engagement from the Foreign Secretary, Liz Truss
(

"He is the victim of a terrible injustice."

Ms Fitton told reporters the shards of pottery that lead to Mr Fitton's "ridiculously harsh" prison sentence were "no more than tossed aside archaeological debris".

She said: "After 13 weeks of emotional purgatory and a gruelling trial he was setenced to 15 years in prison – a highly political, unfair, and ridiculously harsh verdict for attempting to export artefacts out of Iraq.

"These artefacts are in reality no more than tossed aside archaeological debris the size of your fingernail and widely regarded to have no cultural or economic value.

"They are scattered all over the floor at the site in Eridu, unprotected with no signs warning agains their removal."

Previous : Brit confessed to killing wife while so high on drugs he didn’t recognise family – World News
Next : Family’s nightmare as swarm of bees traps them inside home with child covered in stings