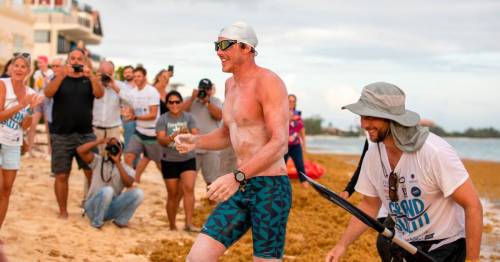 A British plasterer endured 60 miles in shark-infested water to become the first person to swim around the island of Grand Cayman.

Eco warrior Oly Rush, 37, finished the circumnavigation of the Caribbean isle in just under 37 hours.

He was later taken to hospital suffering from dehydration.

Oly, from Poole, Dorset, said: “I got round but it was absolutely brutal.

"It was so difficult and we took the threat of sharks very seriously.”

He partnered with Plastic Free Cayman and Project Planet for the endurance swim, which has so far raised more than £18,000 to combat sea pollution.

Oly said: “It took me to some dark places but I was never going to quit because I was so ­motivated by the ­environmental cause.”