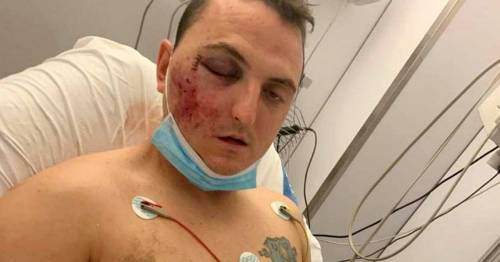 A Brit who was left for dead after being beaten up and thrown off a cliff by a gang in Spain has sent a message of thanks from hospital.

Steen Nodwell, 29, from Weston-super-Mare, was on holiday with friends in the coastal resort of Salou when he was chased by a group of men, his family claim.

The dad-of-three says he was then attacked and pushed off a cliff – leaving him with horrific injuries. Steen had to drag himself out of a "crevasse" to get help before being taken to hospital for treatment.

After an outpouring of support and donations he has now sent a message out from hospital, thanking everyone but saying recovery will be difficult "with two broken arms", reports Liverpool Echo.

Steen Nodwell is recovering in hospital following the attack
(

Steen was left with two broken arms, according to his sister
(

Steen wrote an emotional thank you to people for their support earlier this week. Taking to Facebook, he said: "Just want to say a quick thank you to all the people who have helped in anyway and continue to do so.

"I am eternally grateful it took a lot of heart to lift myself from the crevasse of that mountain. I think all of your heart was right there with me!

"It makes me so emotional just to hear but a few things you guys are doing, thank you so, so much. I still haven't even began my recovery and in truth it's not easy writing this with two broken arms, but I had to send a small message of gratitude. Thank you so much."

His sister Bethan explained how he was stranded in a Spanish hospital in the nearby city Tarragon and has required multiple operations.

Steen's sister shared pictures of his injuries sustained in the attack
(

''This fundraiser is in aid of my brother who was left for dead whilst holidaying in Spain.

''Steen is a strong and determined man and this incident showcases that.

''A gang of local men chased my brother and after brutally attacking him, they threw him off a cliff.

''It is only through sheer determination and courage that my brother despite his life threatening injuries managed to get up and walk for help.

Steen was covered in injuries
(

''Had he not done that, the outcome could have been tragically different."

Pictures show the brutal injuries Steen received including two broken arms, a broken jaw and bad wounds across his body.

According to the fundraiser, Steen was nearly killed in the attack.

She added: ''These men attempted to kill my brother and now we need your help.

''Steen has two broken arms, one of which is a compound fracture, a broken jaw, a fractured eye socket and skull, a shattered cheekbone, internal injuries and more.

''Steen cannot fly home due to his injuries and won’t be able to fly for over a year (low flying not an option either).

''It is an 18 + hour journey that is expected to be done in a car. We need to raise funds to be able to find suitable travel with medical assistance.

''Not only that but Steen needs help and support from his family who will need to be with him.

''Meaning travel expenses are soon going to mount up.

According to Steen he was chased by a gang, beaten and then thrown off a cliff
(

''Whether you help with a penny or a pound, every little helps. Or even a share of this fundraiser. Our family appreciates it all.

''Anyone that knows my brother knows his strong character, I have no doubt he will handle this better than anyone I know.

''But let’s make it as comfortable as we possibly can. Thank you."