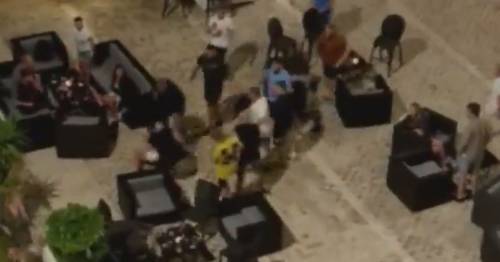 The shocking moment British and Russian tourists brawled at a five-star hotel – reportedly leaving one Brit with a broken arm – was caught on camera.

The scrap between up to 15 men was said to have been sparked when one of the Brits was accused of looking at a Russian man's girlfriend.

The horrifying scenes were filmed on a mobile phone in the garden of a hotel – which has not been named – in Muratpasa in South West Turkey on Monday evening.

This the dramatic moment a mass brawl breaks out between British and Russian tourists in Antalya, Turkey
(

One man is seen then landing a punch on another man, knocking him down.

Russian tourists then attacked their rivals as footage shows the two groups shouting at each other with one apparently telling another to "f*** off".

The scrap evolves to a mass brawl when one of the Russians then allegedly attacks a British tourist.

At one point, a man with a British voice is heard shouting "get off me".

Then some women, who are reportedly the tourists' girlfriends, appear to become involved and try to separate the men.

They can be heard screaming as the fight continues before stopping the violence.

The shocking scenes also show hotel staff, who have not been identified, trying and failing to intervene and stop the violence.

Both were said to have been treated by medical professionals who were called to the hotel.

Police are said to be investigating what happened as none of the people involved has been identified.

Previous : Cannabis e-commerce platform Dutchie raises $350 mln, valued at $3.75 bln
Next : William and Kate’s unusual sleeping arrangements – and it’s down to their staff