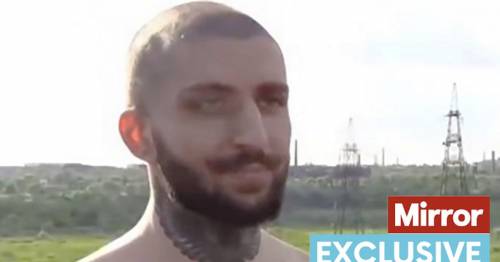 Brave Ukrainians are refusing a ceasefire with Russian tyrant Vladimir Putin – as footage showed a hero of Mariupol tattooed with Spartan slogans of defiance.

President Volodymyr Zelensky ruled out agreeing to any deal that hands
over land to Putin amid a heightened
offensive in the eastern Donbas region.

It came after the Ukrainian leader confirmed the Azovstal steel plant in the strategic port of Mariupol is now under Russian control.

Video obtained by the Daily Mirror shows surrendering troops there being stripped and inspected by Russian soldiers, checking for tattoos that may help in their propaganda that the Ukrainians have far-right allegiances.

One Ukrainian lieutenant – operating under the callsign Chemist – is seen showing tattooed words across his knuckles translating as: “Kill them all.”

When Russian troops ask about the meaning, he calmly responds: “These are the words of King Leonidas.”

The story of King Leonidas of Sparta, told in the film 300 starring Gerard Butler, bears some similarities to the Azovstal heroes’ brave stand against Russian invaders.

The king, knowing he was outflanked by the huge invading Persian forces of King Xerxes, dismissed most of his troops and took just 300 into a bloody rearguard action at Thermopylae.

The Chemist was among the Ukrainian fighters who held the Azovstal plant for over 80 days under siege from Russian invaders who have now won their months-long battle for the port city.

President Zelensky said the site’s last remaining defenders had been given permission to leave.

He told a Ukrainian TV channel: “The boys received a clear signal from military command that they can get out and save their lives.”

A source said: “The Azovstal plant is now fully under Russian control, but the Ukrainian resistance has been nothing short of heroic.”

He surrendered and was taken out of the plant in an armoured vehicle to avoid “a lynching of the Nazi by civilians”, Russia claimed.

One Ukrainian lieutenant is seen showing tattoos emblazoned across his knuckles, which read: 'Kill Them All'- which he said were 'the words of King Leonidas'
(

It came as Putin increased the offensive in the eastern Donbas region and stopped providing gas to Finland.

President Zelensky said: “The situation in Donbas is extremely difficult.”

Yesterday Russia attacked Ukrainian forces in the east and south.

In the southern region of Mykolaiv rockets hit a mobile anti-drone system near the village of Hannivka, he said.

Previous : Man with world’s first double arm transplant is able to hug his grandkids for first time
Next : UK Monkeypox isolation rules explained with 21 day quarantine for those at highest risk