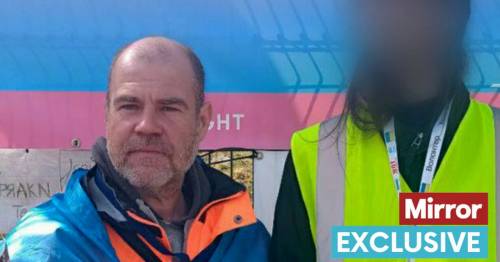 Brave Russians against the war are helping desperate Ukrainian refugees from Mariupol to flee to safety.

The volunteers, who face severe punishment if caught, are working with Ukrainian escape organiser Olexandr Fedorov whose HQ is a tent on the Polish border.

He says they have helped rescue around 1,000 refugees.

Olexandr, 48, said: “There are only two ways out of Mariupol – west into Ukraine which is incredibly risky because of the shelling, or into Russia.

"To save lives, we had to cooperate with Russian volunteers.

"These people are against the war. They’ve been asking us for forgiveness.”

Many Ukrainians from Mariupol have ended up in camps in remote areas of Russia. Others who pass checks and interrogations have been left to fend for themselves in the vast country.

But Olexandr and his anti-Putin allies have even helped some escape Russia and flee to Europe by putting them on trains to St Petersburg.

“From there they go to Estonia,” said Olexandr.

Putin is stamping down on any Russian who speaks out against his barbaric war.

Describing his “special military operation” as an invasion can lead to 15 years in jail.But resistance is slowly growing, experts believe.

And there have been reports of Russian troops defecting to fight alongside the Ukrainians.

Previous : Love Island’s Amber ‘has had enough’ of Ekin-Su fans say after telling scene
Next : Nurse ‘inconsolable’ at thought mum could miss her wedding due to passport delays