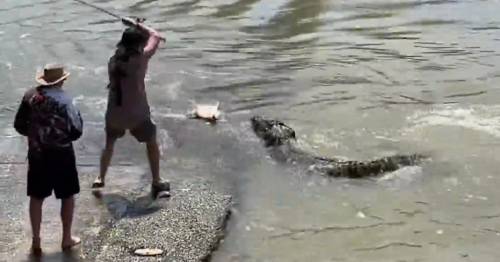 This is the astonishing moment a fisherman battles a 13-foot crocodile over a fish.

The video, which was filmed in the Northern Territory in Australia, shows Scott Roscarel bravely reeling in a barramundi fish as the croc tries to snatch it for itself.

The clip starts with the crocodile swimming through the water as it chases a fish at the end of a fishing line.

The fisherman doesn't appear phased by the predator trying to grab some lunch while others look on and watch the incredible scene play out.

Mr Roscarel didn't let go and when he brings the fish onto the concrete edge, the crocodile follows and comes onto land.

The fisherman is seen jumping back and accidentally kicks his hat at the crocodile.

Screams can be heard as the crocodile gets closer.

A person can be heard yelling: "Let him have it."

Mr Roscarel was successful in keeping his fish.

He later told NT News : "I had to manhandle it. When the fish hit the edge of the crossing it jumped and the line got caught in the front of the crossing.

"I had that much adrenaline, I wasn't thinking too much. I realised how close the croc was and I backed up.

"I snapped my rod in the process and got the fish in the nick of time."

Speaking about his father getting his hat, he said: "What're you doing mate? I've got 15 at home, I've only got one father."

Last week, we reported on how a man recalled the terrifying moment a crocodile clamped its jaws around his head and dragged him into a terrifying 'death roll'.

Scott Roscarel refused to give up his prize fish
(

Joshua Young managed to fight off the 10ft beast but was left with life-threatening injuries after the attack.

The 28-year-old had been spearfishing in a popular tourist snorkelling spot down the road from his home on the island of Caye Caulker in Belize, when the crocodile attacked, pulling him into a terrifying death roll.

Joshua was swimming underwater searching for fish when he felt what he thought was a canoe brush past his body before the beast suddenly latched onto his head with its jaws.

The bartender says he managed to swim to the shore with the predator still clamped to his head and pried his head out of the croc's mouth.