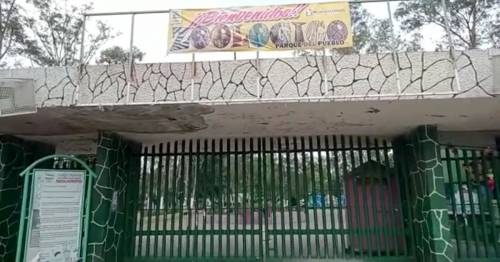 A 10-year-old boy had his arm severely mauled at a zoo in Mexico after trying to stroke a wolf in a horrifying incident.

The young boy was with a family member at Zoologico Parque del Pueblo, which is in the city of Nezahualcoyotl, when he crossed the safety rail and approached the wolf's enclosure.

According to the Nezahualcoyotl Municipal Government, the savage attack happened around 3.30pm on May 6.

Reports have suggested the young boy put his arm through the protective mesh as he tried to attract the animal's attention by calling the wolf over.

The wolf then attacked his arm.

The youngster was initially taken by ambulance to the La Perla Nezahualcoyotl General Hospital but had to be transferred by air to the Hospital Regional de Alta Especialidad de Zumpango, in the city of Zumpango, due to the severity of his injuries.

The state government said in a statement: "Unfortunately, the wolf attacked the minor and wounded one of his arms so emergency protocols were activated and he was initially transferred to the Hospital de la Perla."

After the wolf attack, municipal president Adolfo Cerqueda called an urgent meeting with government officials and members of the State Commission for Natural Parks and Fauna (CEPANAF) to discuss the incident.

The local authorities have confirmed they are providing support to the boy and his family during this traumatic time.

There have been no further updates on the boy's current condition.