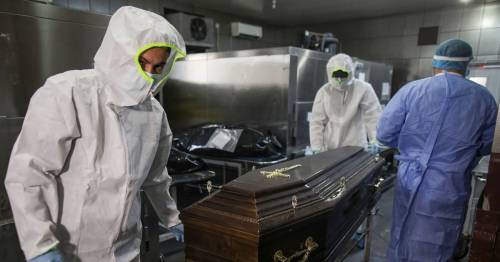 A morgue in Romania has revealed their battle in tackling the bodies of Covid 19 victims.

Bucharest University Hospital's morgue revealed they have a capacity of 15 bodies but reported to be holding 41 bodies.

This comes as Romania battles its fourth wave of the covid-19 virus – the country's worst one yet.

Nurse Claudiu Ionita stated the conditions were 'relentless' as the extra bodies lined the morgues corridors.

She added: "I never thought, when I started this job, that I would live through something like this.

"I never thought such a catastrophe could happen, that we'd end up sending whole families to their graves."

Romania is reported to have one of Europe's lowest vaccination rates.

In fact, just under 36% of the population have been vaccinated despite the country's vaccination campaign last year.

Many medical workers and officials credit the low vaccination rate to many factors – suspicion of authorities, religious beliefs and an increase in misinformation on the vaccine.

Diana Sosoaca, one of the country's most prolific anti-vaxxer, has released multiple videos, including one where she attempted to block locals from entering a vaccine centre.

In the Facebook video, she is heard protesting: "If you love your children, stop the vaccinations. Don't kill them!"

Medical staff are appalled at the effort of public figures to deter people away from getting the vaccine.

Col. Dr. Valeriu Gheorghita, an army doctor who runs the national vaccination campaign, spoke of how his intensive units are full to the brim with patients.

She said: "We have our intensive care units full of patients. We have lots of new cases. We have, unfortunately, hundreds of deaths every day. So this is the reality. And more than 90% of patients who died were unvaccinated."

Mayor of the village of Bosanci, in Suceava County, Neculai Miron, has been vocal about his beliefs against the vaccine, objecting that he does not think it is safe.

The Mayor of the village of Bosanci, in Suceava County, Neculai Miron, has been vocal about his beliefs against the vaccine
(

He said: "We're not against vaccination, but we want to verify it, to satisfy our worries because there have been many side effects

"We don't think that the vaccine components are very safe. It's not a safe vaccine."

Another vocal Pentecostal pastor, Dragos Croitoru, has maintained he has not heard of any deaths within his congregation.

He insists he is not aware of any cases where people are sick from covid and insists although some people within his village have been ill, the mortality rate within his church is zero.

Even when faced with the facts of the bodies of Covid-19 victims filling the morgue at Bucharest University Hospital, the pastor remained unconvinced.

Shockingly it was revealed Suceava ranked third highest in Covid-19 mortality rates for the whole country as of early November.