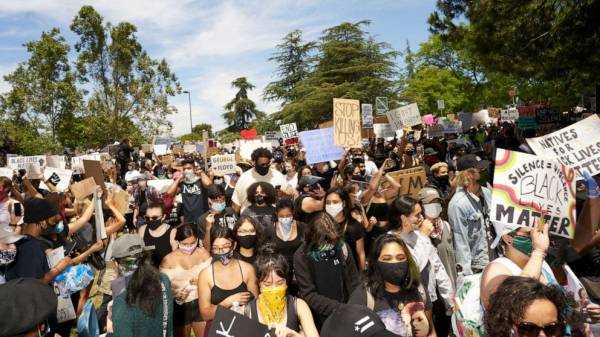 Patrisse Cullors, co-founder of the Black Lives Matter movement and the chair of Reform L.A. Jails, told “Nightline” that at the core of what protesters across the country are demanding, is accountability.

“They want to see the arrest of all the officers involved [in the murder of George Floyd]. They want to have no more terror, no more police terror in their communities,” Cullors said. “Everybody wants to be apologized to. Everybody wants to be told, ‘I’m sorry. What I did was wrong. It was unacceptable. We won’t do it again and, in fact, this is how we change.’”

But grieving communities don’t often receive that kind of apology and acknowledgement, she said.

“We barely get a sorry, we rarely get accountability and we never get change,” she said. “So what are people to do?”

Cullors says these demonstrations are not just about mourning the death of black individuals but also protests “for black life.” She said “tens of thousands” of people marched peacefully with her over the weekend but it was the police who “escalated,” she said.

“Police came in riot gear, started shooting people with rubber bullets, tear gassing people, batoning people. It was incredibly aggressive,” she said. “It went from zero to 100. How did that happen? … Across the country, we’ve seen police aggravate and be the aggressors in protests.”

Cullors says she is “absolutely and always pushing peace.”

“That peace looks like requiring law enforcement to discontinue using violence. It’s really, really important that we identify who the real aggressors are and who they’ve been for decades,” she said. “I think it’s inadequate to ask for a peaceful protest movement like Black Lives Matter to try to intervene.”

“It is cowardice to use law enforcement to deal with the real-life social problems that’s called ‘racism’ happening in your city, in your state,” she said.

Black Lives Matter started seven years ago when George Zimmerman was acquitted for the murder of Trayvon Martin. The movement has since gained traction across the country and overseas.

“The issue of police terror is unfortunately an issue that black communities have been facing pretty much for the last 400 years,” she said. “Many people don’t understand that the foundation of policing is actually in slave patrolling. The first law enforcement agencies were out to catch black people who were leaving — fleeing from slavery.”

Cullors says that by pairing that history with racism, “you get a really bad combination.” Since Donald Trump took office, she says it’s gotten even worse.

“We’ve seen a ratcheting up of pushing law enforcement to be more brutal, use excessive force,” she said. “He has told law enforcement, in his own words to hurt people… And what we know are those people are mostly black people.”

She says viral videos capturing brutality against black individuals have helped society better understand the prevalence of these incidents.

She explained why Black Lives Matter is calling for police to be defunded.

MORE: Why some police officers stood with protesters outraged over George Floyd's death

“We want to reduce law enforcement in our communities,” she said. “The more contact we have with law enforcement, the more death is going to happen with black people.”

Cullors says that police body cameras and training will not stop these deadly encounters.

With allies of every race and creed backing protesters, Cullors weighed in on what they can do to help.

“What they can do is follow the lead of black leadership and your own local city and your state… You can go to and be a part of many organizations right here in Los Angeles we have so many amazing organizations on the frontlines of this work,” she said, listing Justice L.A., Reform L.A. Jails, Dignity and Power Now and the Youth Justice Coalition as examples.

Previous : Finland Rolls Ahead With 5G Following Spectrum Auction Among Telecom Operators
Next : Drones deployed during marches were not to spy on protesters: Authorities