Biden’s Blinken Brexit Bust-up With BoJo: Is This the End of the ‘Special Relationship’? 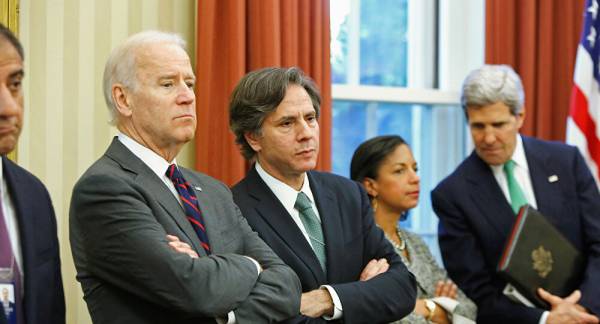 With British Remainers pinning hopes of a last-minute halt to Brexit on Joe Biden’s claim to the US presidency, will he and PM Boris Johnson get on like a house on fire? Or are Biden’s cabinet appointments an omen of chilly relations between Number 10 and the White House?

With Joe Biden seemingly set to become the oldest man to assume the US presidency, what do his picks for his nascent administration spell for the ‘special relationship’ with Britain?

The media has been awash with speculation that a Biden win would portend doom for British Prime Minister Boris Johnson, who he sees as a “kind of a physical and emotional clone” of sitting President Donald Trump.

And fans of the European Union are ecstatic at the thought that a Biden presidency might put a spoke in the wheel of Brexit – even though the UK has already left the European Union (EU) and the transition period is set to expire 20 days before the next president is sworn in.

The former vice-president has signalled a sea-change from Trump’s isolationist foreign policy, pledging to “restore our historic partnerships” while “calling on all NATO nations to recommit to their responsibilities as members of a democratic alliance.”

While that is likely to ring alarm bells in Moscow, Beijing, Tehran, Pyongyang, Damascus and elsewhere, it ostensibly bodes well for relations with the UK, one of the key NATO powers after the US and a historical transatlantic bridge between Europe and America.

With Biden making action on global warming and opposition to fossil fuels a central plank of his election manifesto, Johnson’s announcement last week that sales of new petrol and diesel cars will be banned from 2030 has them singing off the same hymn-sheet.

BoJo’s good relationship with The Donald for the the year-and-a-half he has led his country is just good diplomacy, however much it rankles fanatical US Democrats.

Which leaves Britain’s choice to leave Brexit as the big bone of contention between the British PM and the US president-elect-presumptuous.

All Rhodes Lead to Brussels

Biden served as vice-presidential wingman to Barack Obama, who unsuccessfully tried to meddle in the UK’s 2016 EU membership referendum with the threat that Britain would be “back of the queue” for a post-Brexit trade deal.

Now he is rumoured to be considering former White House staffer Ben Rhodes for a new job in government. Rhodes revealed in 2018 that Obama made his ill-fated intervention at the bidding of then-British prime minister David Cameron, who led the Remain campaign and resigned after losing the vote.

“We had come here to try to help the Remain campaign and we had a meeting with David Cameron and his team,” he told Radio 4’s today programme then. “We were all in violent agreement about the negative consequences of Brexit.”

Biden’s choice as secretary of state is Antony Blinken, who held the jobs of deputy national security advisor and deputy secretary of state during Obama’s second term. Aside form his role as architect of some of the bloodiest US foreign interventions of those years, Blinken has also been frank in his contempt for the UK’s democratic decision to leave the EU.

Speaking on the Pod Save The World podcast last year, Blinken called Brexit a “total mess”.

“It’s awful tough to walk that line between interfering in someone else’s politics but also standing up for your own interests,” said Blinken, an architect of Obama’s arming of sectarian militants in Syria and a supporter of the bombing of Libya and Yemen for the sake of regime change. But “our interests clearly would have been in keeping Britain in.”

And he said podcast co-host Rhodes was “exactly right” when he said Brexit would have “shitty consequences” for the British economy.

Former secretary of state John Kerry, another septuagenarian who has been likened to both Herman Munster and Lurch from The Addams Family, has been tapped for the newly-created post of presidential Climate Envoy.

Speaking in Munich in February 2016, ahead of Cameron’s unsuccessful bid to seek reforms from the EU to head off the Brexit vote, he said Washington had a “profound interest” in a “strong United Kingdom staying in a strong EU.”

And just days after Britain’s vote to leaver the EU, Kerry said Brexit could be “walked back”, noting that Cameron had to “start negotiating a thing that he doesn’t believe in” and “has no idea how he would do it”.

And in what was seen as a jibe at Johnson, he added: “And by the way, nor do most of the people who voted to do it.”

Kerry was one of those who later raised the spectre of a return to the “Troubles” in Northern Ireland as a result of Brexit, warning in 2018 it could have a “negative impact on the progress made in the last 20 years” -despite repeated assurances from Westminster that it was not the UK which was threatening to impose a ‘hard border’ with the Republic of Ireland, in breach of the Good Friday Agreement.

Yellen from the Rooftops

Biden’s choice of treasury secretary Janet Yellen also has form as an opponent of Brexit.

As Federal Reserve chair in June 2018, ahead of the referendum, she warned that Brexit could unsettle investors.

“One development that could shift investor sentiment is the upcoming referendum in the United Kingdom,” Yellen said. “A UK vote to exit the European Union could have significant economic repercussions.”

A Hillary to Die On

Former senator, secretary of state and losing 2016 presidential candidate Hillary Clinton has not yet been given a place on Biden’s team, but she remains a wildcard and the elephant in the room of his shadow administration.

Clinton made no bones about her opposition to Brexit during the 2016 election campaign, while Trump hailed the historic vote.

Brexit “may well go down as one of the greatest and most unnecessary self-inflicted wounds in modern history,” she said during a visit to Northern Ireland in 2018.

“I make no excuse for being against Brexit from the start,” Clinton said. “I thought it was a bad idea before the referendum, and I think it is an even worse idea now.”