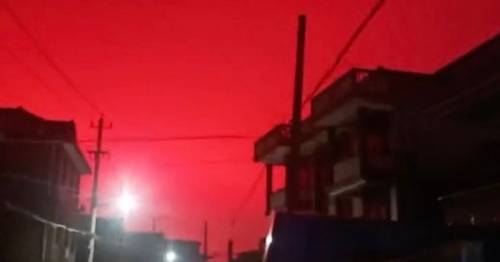 The sky turned blood red in China over the weekend thanks to a weather phenomenon and a fishing boat.

There were fears of a raging fire or the start of the apocalypse as the city of Zhoushan was blanketed by a deep scarlet haze for hours on Saturday night.

Meanwhile, meteorologists were scrambling to provide an answer.

In less than 24 hours, videos and photos shared online had racked up 150million views and theories were rife.

Footage taken by concerned residents in the city, which neighbours Covid-hit Shanghai where infected people are being sent to isolation zones, shows a red sky and thick fog.

Some children can be heard telling their parents: "I'm scared."

The videos were posted to Douyin, a social media platform in China similar to TikTok.

The sky turned blood red for hours on Saturday
(

A similar weather event took place in the 1700s
(

It turns out the phenomenon was caused by a combination of very low hanging cloud and light reflection from a nearby harbour.

More specifically, from a vessel harvesting saury – a silvery-coloured fish.

Some social media commenters pointed out that a similar phenomenon happened for nine days in 1770.

Scientists believe back then it was due to a high level of aurora activity.

Experts searched hundreds of documents to find evidence of the odd red auroras which were seen throughout East Asia centuries ago, reports LiveScience.

Some feared the phenomenon was Covid-related
(

And while the recent occurrence looked similar, its cause was completely different.

A member of the space physics research team of the China University of Geosciences in Wuhan said there was no evidence of any solar or geomagnetic anomalies in Zhoushan.

The strange lighting was due to a boat harvesting harvesting Pacific saury, according to state-owned media CCTV.

The Zhoushan meteorological bureau said: "When weather conditions are good, more water in the atmosphere forms aerosols which refract and scatter the light of fishing boats and create the red sky seen by the public."

On Sunday, it had said: "Yesterday was quite foggy and clouds were forming at a low altitude.

"This is a phenomenon caused by light refraction."

The deputy manager of the company which runs the fleet said: "The red lights came from our fishing boats. We have them turned on when we are catching saury.

"The red light refracted out of water and projected to the sky, causing a mirage-like phenomenon.

"It is very common especially around coastal areas."

The meteorological bureau issued a "low visibility" yellow warning from Saturday night until Sunday morning, when the red sky returned to normal.