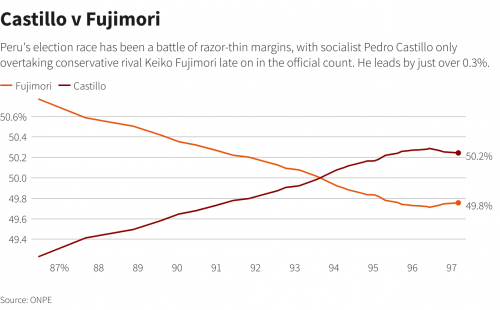 Peru’s presidential election vote count ticked closer to the end on Tuesday, but a slender margin between the two polarized candidates, contested ballots and accusations of fraud mean the winner may take a lot longer to confirm.

Socialist Pedro Castillo, who has roiled markets and miners with plans to shake up the copper-rich country's politics, held a slim lead of some 50.2% ahead of right-wing rival Keiko Fujimori on 49.8%, with almost 96% of the votes tallied.

The leftist candidate, the son of peasant farmers, had surged late in the count, driven by an energized rural vote beyond capital Lima. Fujimori, the scion of a powerful political family, started to close the gap on Tuesday, however, as overseas votes came in that favor her.

The tight gap – some 80,000 votes – and bubbling tensions, with Fujimori alleging fraud and scattered marches by Castillo supporters after he had called on them to "defend the vote," meant any final result is likely to be contested.

"Peru needs its children to rescue her," Castillo told supporters from a balcony late on Monday. "We have to be respectful of the popular will and I will be the first to enforce the will of the Peruvian people."

Fujimori said she held out hope of closing the narrow gap on Castillo. She said there was "clear intention to boycott the will of the people" by his party, though offered little concrete evidence of what she called "irregularities."

In a note, Citi said that Castillo's lead was bound to narrow as overseas ballots were counted, but that it would take a large turnout for Fujimori to overtake him again. Contested ballots, it added, could be key.

There are some 1,364 contested 'actas,' or voting tables, which is likely to equate to some 270,000-300,000 votes. They are set to be counted by a special committee set up by the electoral board, which could take at least a week.

If Castillo wins, investors will be looking to see whether he reaches out to calm the country following the divisive election, and what his early messaging is on economic policy direction and the investment outlook, Goldman Sachs said.

Castillo has promised to redraft the constitution to strengthen the role of the state and take a larger portion of profits from mining firms. Fujimori has pledged to follow a free-market model and maintain economic stability in Peru.

“The (market) reaction to Peru is pretty muted,” he said. “For a start maybe we got trapped in the narrative that it was a binary choice… Maybe from a political point of view it is, but from a real economic perspective it doesn’t seem to be.”