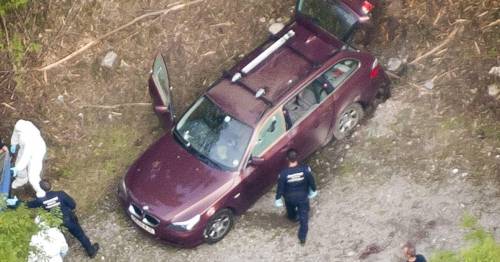 A suspect being questioned over the murder of a British family and a cyclist in the French Alps is a "mystery motorcyclist" seen driving away from the crime scene, prosecutors say.

Yesterday a man was arrested on suspicion of murdering Surrey businessman Saad al-Hilli, 50, his wife Iqbal, 47, and his mother-in-law Suhaila al-Allaf, 74, who were gunned down in their BMW car in 2012.

French cyclist Sylvain Mollier, 45, also died in the bloodbath after being shot seven times at point blank range at a lay-by near Lake Annecy, eastern France.

Officials have confirmed the man, who has not been named, was first arrested seven years ago and released without charge.

The massacre happened close to Lake Annecy on September 5, 2012, when the suspect is understood to have been seen looking lost.

Surrey businessman Saad Al-Hilli was gunned down in the attack
(

The Al-Hillis' daughter, Zeena, four, hid in the footwell of the vehicle and was unscathed, while her sister, Zainab, seven, survived.

An e-fit photo of a "prime suspect motorcyclist" with a goatee beard was released in November 2013 and showed him in a distinctive black helmet, of which only about 8000 were made.

The image, mainly produced by two forest rangers who briefly spoke to the man, finally led to a first arrest of the biker – a businessman from the French city of Lyon – in 2015.

He told police he had been on his way home from a paragliding trip in the Alps and was released without charge.

But on Tuesday morning, the man was re-arrested at the home in Lyon that he shares with his wife and children.

An initial custody period of 24-hours was extended on Wednesday, as prosecutors said there were "inconsistencies with his alibi" that needed to be resolved.

He was being held on suspicion of "murder and attempted murder", as his defence lawyer, Jean-Christophe Basson-Larbi, pleaded his innocence.

Mr Basson-Larbi said: "This is a judicial error. My client is going through hell."

Quoting his client directly, Mr Basson-Larbi said: "The position of this gentleman is always the same.

"I was strolling, I went to this region for something specific. The weather was fine, he was wandering on paths he didn’t know because he didn't use his GPS.

"He crossed paths with motorists, maybe, but he didn't cross paths with this poor family."

The motorcyclist said he "did not make the connection" between his presence near the scene of the crime and the e-fit when it was first circulated, and that is why he did not initially come forward.

However, investigators have now detected discrepancies in his testimony while interviewing him at a secure police station in Chambery.

Annecy prosecutor Line Bonnet-Mathis said in a statement: 'A person was taken into custody on January 12, 2022 at 8:05 am by investigators from Chambery in connection with the assassination of the Al-Hilli family and Sylvain Mollier.'

Previous : Turkish factory output jumps 11.4% in November
Next : Kids ‘frozen’ as school confiscates coats if they aren’t official £25 ones with logo