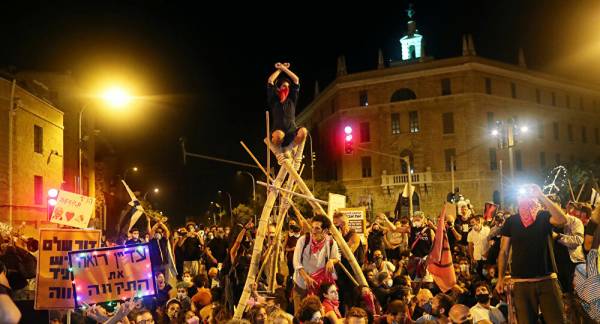 TEL AVIV (Sputnik) – Nearly a dozen people were arrested during anti-government demonstrations in Israel, where a new coronavirus-related lockdown has been introduced, The Jerusalem Post newspaper reports.

One driver raced toward a crowd of protesters in his car, hitting the breaks at the last moment.

A car was driven at speed towards protesters demonstrating against #Israeli Prime Minister Benjamin #Netanyahu in #Jerusalem on Sunday.
Footage shows the driver braking abruptly in front of the rally, before being arrested. A police investigation is now reportedly underway. pic.twitter.com/RPWeN6uRVb

The driver was arrested. A total of 11 protesters were detained by police on Sunday, according to the newspaper.

On Friday, a second coronavirus-related lockdown took effect in Israel, for a period of three weeks with a possibility of extension. An additional 1,000 police officers have been mobilised to enforce the lockdown, Israeli police spokesman Mikhail Zingerman told Sputnik.

Anti-government protests in Israel have been ongoing since July, with demonstrators calling for Netanyahu’s resignation amid an economic crisis caused by the coronavirus pandemic.

Previous : Labour MP Slams Johnson’s Brexit Bill, Says It Is ‘Straight Out of Donald Trump Playbook’
Next : Biden, Democrats have $466 million cash on hand, over $100 million more than Trump, GOP