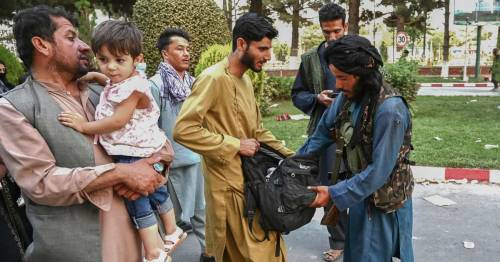 Afghans say they are dreading the ­winter ahead as the country faces economic meltdown 100 days after the fall of Kabul.

The United Nations warned yesterday Afghanistan is on the brink of a ­humanitarian catastrophe and the cost of a banking collapse “would be colossal”.

With food and fuel prices soaring by up to 75%, almost 23 million Afghans face ­starvation – more than half the population.

Some families are even selling their children to stay alive, reports warn.

Maryann Horne, a senior adviser on humanitarian crises for the British Red Cross, flew into Kabul this month after five years away.

She said of her return: "I was struck again by the beauty of the landscape, but also just how dry it is. Areas like the Central Highlands, which will soon be cut off for winter, have suffered terribly with the drought."

Maryann Horne in Nangahar province, Afghanistan, on the road, as part of a needs assessment mission to a remote village
(

She added: "Together with the absence of cash, the socio-economic impact of the pandemic and ­widespread displacement, these factors have all come together to create a perfect storm."

Talking to people, it is clear they are struck by the feelings of dread. They know this will be a winter like no other.

The UN is calling for urgent action to prop up Afghanistan’s banks just months after Taliban forces took control of the capital on August 15.

The lightning offensive that began in early May brought a ­humiliating end to ­America’s longest war.

Two decades to the day since the War on Terror began in 2001, the withdrawal on September 11 was heavy on symbolism for the West.

The date was supposed to bring a sense of closure and show the US was still in control, even as it left.

Instead the operation descended into chaos, stunned the world and turned back the clock 20 years in Afghanistan.

As helicopters landed on the US embassy in Kabul and diplomats destroyed documents, parallels were drawn with the final days of the Vietnam War and the fall of Saigon.

Kabul airport became a scene of panic as governments rushed to bring their citizens home and ­thousands of Afghans tried to flee.

Videos showed hundreds of people scrambling onto the runway, with some clinging on to US Air Force planes, before falling to their deaths.

Image:
Courtesy of Omar Haidiri/AFP via)

People were crushed to death in the rush to flee or killed by Taliban soldiers firing into the crowds.

Then, on August 26, two suicide bombers detonated next to the airport gates, killing at least 183 people, including 13 US soldiers.

The atrocity led to another tragedy as Americans mistakenly killed 10 innocent Afghans, including seven children, in a drone strike.

By the time the last man out, Major General Chris Donahue, boarded the final flight, more than 123,000 people had fled, and the lives of the 35 million left behind had changed forever.

Despite promises of a more moderate regime, the Taliban have swiftly reimposed their brutal rules.

Public hangings have returned, girls have been banned from secondary schools and widows and teenagers have been forced to marry fighters. In some areas, hairdressers even face being punished for shaving or trimming beards.

Zahra Joya is an Afghan journalist who, fearing reprisals, managed to flee on a UK evacuation flight.

The 29-year-old owner of Rukhshana Media is now rebuilding her life “from zero” in London, along with her four younger siblings and baby niece who escaped with her.

But she still fears for her relatives who stayed in Kabul. She said: “The streets of Kabul are empty, my relative says.

“People are too afraid to leave their homes. I’m so worried about the future of my relatives.

“Our neighbours don’t have any food, not even bread, it is horrible.

“Everyone just stays home, my relatives who worked as teachers, shopkeepers and in offices lost their jobs, now none of them work, no money is coming in.

“When we knew the Taliban were coming I had to leave almost immediately because of my job. And we knew it wasn’t safe for my sisters to stay behind.

“The British Embassy arranged for me and my younger siblings to come and my relatives dropped us to the airport. It was the hardest goodbye.

“The airport was very crowded. It was so horrible to watch people desperately trying to get a flight. We brought nothing, just my work laptop.

“After all the hard work over the last 20 years, life has become meaningless, people have lost their hope for the future. I am safe but I have a lot of problems in my mind, I can’t sleep, I can’t stop thinking about Afghanistan and my family.

“When I see brave women on the streets in Afghanistan, speaking up about the Taliban, it makes me very happy and proud. I wish I was there to support them, but I was at risk if I stayed there.

“I am so fearful about what is going to happen to my country.”