‘A dirty secret’: Bristol reckons with its slave-trading past during George Floyd protests 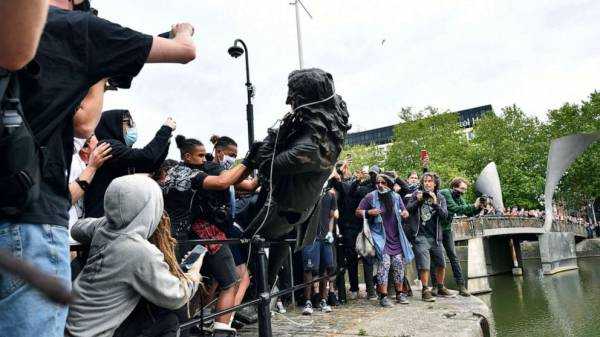 LONDON —
The recent images of a statue of the 17th century slave trader Edward Colston being toppled by anti-racism protesters in Bristol, England sent shockwaves around the world. For a moment, the city found itself as one of the focal points of the protests that erupted in countries around the world after the death of George Floyd in police custody in Minneapolis.

“My first reaction was one of shock,” Roger Griffith, a writer and consultant on racial equality, who has lived in Bristol his whole adult life, told ABC News. “I couldn’t believe it. The toppling was a significant moment that a lot of us had been campaigning for.”

Bristol, in the southwest of the U.K., has always had an uneasy relationship with its past as a slave-trading hub and the role of Colston, a major benefactor, in that trade went “largely unremarked” until the 1990s, according to Historic England.

Ships would “leave Bristol filled with goods to purchase slaves, carry those slaves to West Indian plantations, and return to Bristol laden with sugar,” Historic England, the British government’s historical body wrote in an online post. “Although Colston’s principal connection with the slave trade was through the London-based Royal African Company, he has come to be seen as the pre-eminent representative of this aspect of Bristol’s history.”

Colston, as deputy director of the Royal African Company, is estimated to have helped oversee the kidnapping and trafficking of 84,000 West African slaves, 19,000 of whom died on their way to the Americas, according to historian David Olusoga.

The felling of the statue Sunday, which was dumped into the harbor by a large crowd, has divided lawmakers and pundits in British political life The home secretary, Priti Patel described the incident as an “utterly disgraceful” act of vandalism that distracted from the cause of the protesters.

Yet for many Bristolians, toppling the statue has had an altogether different significance.

Marvin Rees, the mayor of Bristol, told ABC News that while he could in no way condone the damage, and expressed concerns about protests being linked to a second wave of COVID-19, he said the British government’s position as conveyed by Patel’s comments, amounts to a “wilfull misunderstanding” of the issues at hand.

“I am a part of this city, and I cannot pretend that the presence of this statue to Colston — a slaver — with a plaque on it that says he was a ‘wise and virtuous son of the city,’ is anything other than a personal affront to me and people like me,” he said. “And not just black and brown people, but white people too, who are horrified that the city would give a place of honor to someone who made money through the kidnap and enslavement of other human beings.”

Although Colston’s name can be seen in the roads, hills and pubs, Bristol is an overwhelmingly liberal city. The University of Bristol, which has issued a statement in support of the protests, recently acknowledged that it “indirectly” benefited from the slave trade. Attempts to place a plaque on Colston’s statue highlighting his role in the slave trade had been unsuccessful for years.

MORE: US 'vulnerable' to accusations of hypocrisy, as China and Iran criticize response to George Floyd protests

For Rees, Bristol’s slave-trading history was a “dirty secret,” when he grew up, and Griffith was not aware of the city’s past until after he had left school.

“[I found] the city I lived in was immersed in my ancestors’ blood, and got rich on that,” he said. “But no one was talking about that, and I wondered why.”

Instead, like those in the U.K. now protesting after the death of George Floyd, Griffith learned most about his identity by looking to America – learning about his identity through the works of civil rights activists Dr. Martin Luther King Jr. and Malcolm X.

The protests in Europe, while in solidarity with their U.S. counterparts, have to a large degree focused on the continent’s imperial past. In Brussels, Belgium, a statue of King Leopold II, who was responsible for well-documented atrocities in Congo, was mounted by protesters carrying Congolese flags. Protesters are now calling for the statue, as well as others of the 19th-century monarch, to be removed.

The councils of both Manchester and London have launched reviews into diversity across their landmarks. In Oxford, protesters are calling once again for the removal of a statue of colonialist Cecil Rhodes at the university.

Protesters in London last week told ABC News that they were marching to help “educate,” particularly when it came to Britain’s past.

When asked if Bristol might finally be reckoning with its past, Rees said: “I’d say there’s a huge amount to do. Symbolic gestures are great but the real work continues.”

The statue itself will most likely be removed from the harbor and placed in a museum, Rees said.

Yet the gravity of the moment in local history is clear, Rees said, echoing the point made by Olusoga in an article in The Guardian.

“The journey of that statue, from the man himself, the Edward Colston, to the forging of that statue years after he had died, to its putting up with the plaque saying he was a ‘wise and virtuous son of the city’, to the growing debate about whether it should be there, to it being torn down and thrown in the harbor,” Rees said. “That is a story of Bristol. And if we choose, we will be able to learn from that story… we will be able to build a better future for ourselves.”