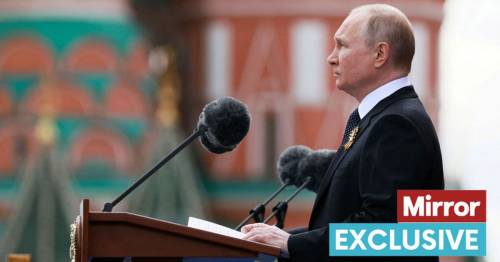 Vladimir Putin failed to deliver his speech with conviction and was there are numerous signs he was lying, a body language expert has claimed.

This morning the Kremlin boss gave an 11-minute speech in Moscow's Red Square where he didn't mention the progress he's made in the war and offered no indication of when he thinks it would end.

He instead tried to justify his invasion by claiming Russia was in danger.

He told crowds that the devastating intervention in Ukraine had been necessary because the West was "preparing for the invasion of our land, including Crimea".

Putin's speech – his first major televised address since March 18 – comes amid further defiance from Ukraine's leader, who issued a statement also marking the 77th anniversary of victory in Europe.

Mike Carter a body language expert, watched Putin's speech and speculates that the warmongering Russian President spoke with no passion or conviction – something you wouldn't expect from a global leader rallying his troops.

Describing the affair as "stuffy and starch", Mr Carter told The Mirror of seven major points that led to his conclusion that Putin may be lying and have a "lack of passion".

When asked if this means Putin doesn't believe his own words, Mr Carter said: "That's exactly it. It's so odd because he must know the war is going badly. He doesn't appear confident in what he is saying."

Rocking from side to side

Throughout the speech, Putin is seen rocking from side to side or swaying as he speaks.

Mr Carter said: "The rocking from side to side is generally a sign of agitation or lack of conviction.

"If somebody is rock solid and still grounded it shows signs of confidence and authority."

Another point Mr Carter makes is that Putin doesn't use his hands at all and in some parts his hands cannot be seen at all.

Mr Carter said: "He uses no hand gestures at all, and he only uses his hands to turn the pages.

"We use our hands to show passion and there appears to be a lack of passion in terms of body language. He never uses these hands apart to turn pages."

This is a stark contrast to Putin's speech on March 18, where he held a pro-war rally and walked freely around the stage and moved his hands while he spoke to crowds.

During the speech, Putin is seen to rest his hands on the lectern
(

Mr Carter explained one thing that may not be noticeable right away is how Putin pinches the area between his brows.

He said: "The area between the eyes, the brow – it generally shows concern when we tend to sort of pinch this area between eyebrows.

"And that is quite marked on him, there is a lot of movement there which generally shows concern."

He added: "People who are completely comfortable and confident don't show this."

During the speech, Mr Carter raised concerns about the Kremlin leader's breathing and that it could signal he is in pain.

He said: "This might not be as noticeable to most people but he is breathing very shallowly.

"We hold our breath or breathe this way when something physically or mentally isn't right. His breathing is very shallow which could be some kind of pain he is enduring.

"We hold our breath when something mentally isn't right. He is holding his breath a lot and he appears to be short of breath."

Another concern Mr Carter raised is that Putin stands with his feet wide apart, which at first appears to be a 'power pose' for confidence.

He said: "But it could have something to do with the rocking from side to side.

"He could be standing in this pose to prevent from falling over. His feet are flat on the ground, which shows he feels grounded."

Putin struggles to look up from his notes during the duration of the speech, which could be a sign he's not feeling passionate or driven.

Mr Carter said: "It links back to his hand gestures because he's reading and looking down most of the time to read his notes.

"You'd expect him to look out more and again that would suggest a lack of conviction he feels.

"He may feel the need to read his notes to get everything right. There is no going off script."

He added: "It’s that lack of direct eye contact which makes the speech appear so one-dimensional and lacking in drive and passion.

"It’s hard to see from the camera angle and the fact that he’s reading if there is excessive blinking.

"There might be, and that would suggest uncertainly. When we blink excessively, we do so to shut out the truth of what we see. Even when everyone else is standing to attention and looking up, Putin is still looking down."

During his pro-rally speech in March, he didn't follow a script or teleprompter as he appear to speak off-the-cuff to crowds.

Mr Carter said: "Not at one point does he smile. In a way, it is slightly interesting because it is a warming gesture and you think of the great orators – even Hitler smiled.

"Smiling is to try and show warmth to bring people on side and get them to laugh."

Mr Carter described Putin's speech as "measured and controlled" but added that "it screams to me a lack of passion or a need to secure about what he is saying".

He added: "A real lack of passion, it is not a passionate speech. It would be much more passionate if he used his hands."

He continued: "When you take the combination of the rocking, the shallow breathing, lack of hand gestures, the brow – you are looking at a man who appears to have lost his conviction."