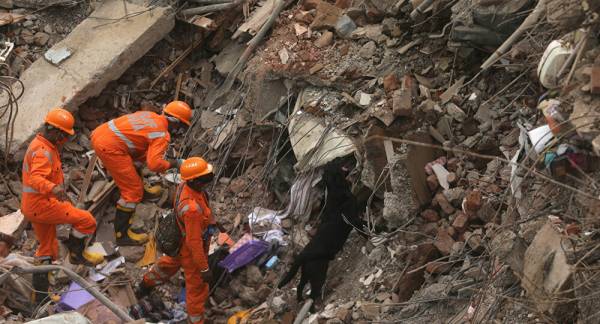 Around 31 people have been rescued by locals as well as India’s National Disaster Response Force (NDRF), while 20-25 people are feared trapped in the rubble, NDTV news reported.

A three-storey building in Bhiwandi, a city in India’s Maharashtra state collapsed early Monday; at least 10 people have died and several remain trapped.

The incident occurred in Bhiwandi’s Patel Compound area around 3.40 a.m. local time on Monday. The city of over 700 thousand is located 15 km from India’s ‘financial capital’, Mumbai.

While the National Disaster Response Force (NDRF) team, along with the fire brigade and police, are carrying out rescue operations, heartbreaking pictures and videos of the fatal accident have made it to social networking platforms.

At least 10 people have died and several others trapped or injured in a building collapse in Bhiwandi’s Dhamankar Naka. Bhiwandi is in Thane district of Maharashtra, around 40km NE of Mumbai. Update via @sajananambiar. Photos via Praful Gangurde pic.twitter.com/I4241hrSrL

Shoddy construction practices and lack of regulatory oversight. A different pandemic. One that needs to be addressed asap.

​The 40-year old building reportedly accommodated around 20 families. A notice had been issued by a civic body to vacate the building, which was on a dangerous building list, Bhiwandi-Nizampura City Municipal Corporation commissioner Pankaj Ashiya said, as quoted by The Times of India on Monday.