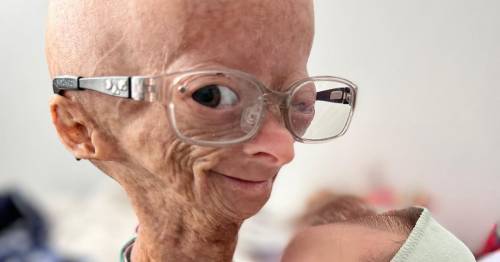 A young girl who touched the hearts of millions with her real-life Benjamin Button story has died, her heartbroken family have announced.

Becoming an internet sensation, she inspiration people around the world by sharing her journey while living with Progeria.

The condition sees a person's body age faster than it should and she quickly became unrecognisable as a teenager.

Progeria affects only around 500 people across the world with a low life expectancy of just 13.

Adalia Rose is "no longer in pain", her mourning family said
(

The teen inspired millions but documenting her journey
(

They wrote: “January 12, 2022 at 7pm Adalia Rose Williams was set free from this world. She came into it quietly and left quietly, but her life was far from it.

"She touched MILLIONS of people and left the biggest imprint in everyone that knew her. She is no longer in pain and is now dancing away to all the music she loves.

“I really wish this wasn’t our reality but unfortunately it is. We want to say thank you to everyone that loved and supported her.

Her family thanked her followers and doctors
(

"Thank you to all her doctors and nurses that worked for YEARS to keep her healthy.

"The family would now like to mourn this huge loss in private.”

Adalia, from Texas, US, had built up a big fan base with people wowed by her bravery.

People compared her to Benjamin Button, the subject of hit film starring Brad Pitt which tells the story of a man who starts ageing backwards.

Her clips amassed over 170 million views on the video sharing platform YouTube in 2018 before the disease really took hold.

She suffered with the Progeria, which caused problems with her growth, her voice and joints
(

Not only did it affect her growth, but it caused problems with her voice and joints.

One user on Facebook said: “I’m so sorry Natalia and Ryan. Adalia lived life to the fullest each and every day. She touched so many people through her videos and taught us all to never take anything for granted. Fly high sweet angel!”

A second added: "An inspiration to do many. So sad."

While another said: “She was a special person that gave joy to many all over the planet. She will always be with you.”