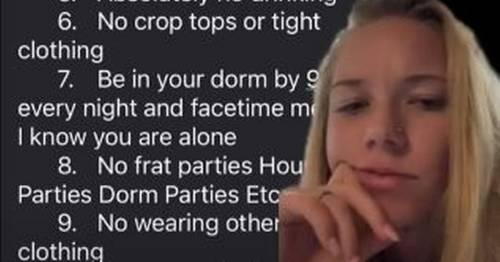 A woman has branded her ex-boyfriend as “crazy” and “controlling” after he sent her a list of 11 rules he wanted her to follow while she was away at university.

Carolyn took to TikTok, @ccarollynn, to share a screenshot of the text message she received listing the terrifying rules – which included keeping her location switched on her phone so he could track her, and banning her from “coming into contact” with boys.

Introducing the video, she said: “I thought it would be funny to do a reading of the rules my crazy, controlling ex-boyfriend sent me before leaving for college.

“He put ‘pay attention’ in all capitals.”

Carolyn then ran through the list of rules she was given.

Reading off one rule which read, “Approve all outfits you wear past me and my mum”, she added: “I don’t see what you or your mum have to do with what I wear.”

She then also stated after reading another rule which banned her from wearing crop tops and tight clothing: “No more sports bras I guess, because they’re a little tight.”

Other rules on the list included: Absolutely no drinking, no frat parties, house parties, or dorm parties, and no wearing other boys’ clothes.

One of the most concerning rules on the list read: “Be in your dorm by 9pm every night and FaceTime me so I know you are alone.”

The woman’s video has received 2.5 million views since it was posted this week, and Carolyn has already made several follow-up TikToks to further explain the situation.

In one video, the woman explained to others how they can get help from abusive relationships, and apologised if her video came across as insensitive.

She said: “Some people were saying they were in similar situations and that their situation did escalate, and I am so sorry for that.

“I was not trying to glamourise anything. I know that I was kind of joking and laughing.

“I just want to say that behaviour is considered abuse. That’s considered emotionally controlling and abusive, and if you are in an abusive relationship, domestic violence, anything like that – there are tons of help resources and hotlines you can call.”

Carolyn’s videos have thousands of comments, with many people reaching out to offer her support, and others baffled by the man’s actions.

One person wrote: “This is not just insecure this is abusive.”

While another stated: “This whole thing breaks my heart, I’m glad you got out of that.”

And a third said: “I can’t decide which one is the worst, but it’s got to be the fact he would be rating your everyday outfits with his mum.”

Previous : Pakistani security official urges U.S. to engage with Afghanistan
Next : Mum wins £1.4m payout after police pulled her from car, beat her and seized child