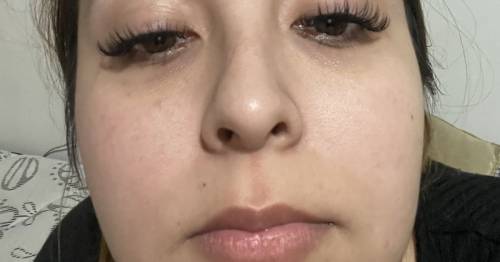 A woman claims she nearly lost her sight after getting a set of fake eyelashes fitted as a treat.

The the 23-year-old, known only Samantha says a lash technician allegedly glued them “too close to her skin”, causing severe irritation.

The nurse from Mexicali Baja, California, US, wanted to get her eyes professionally done for the day of her graduation as a treat.

Having already had fake lashes professionally applied in the past, she had no concerns or allergies.

Sharing her story on TikTok, Samantha explains how the beauty treatment almost left her blind.

Her story has now gone viral with over one million views.

Samantha says she nearly lost her eyesight after getting fake eyelashes
(

“I did it a week ago with a girl who rents space in a store," she told Needtoknow.online.

"When I got home after the procedure, which was in the evening, my left eye was swollen and both eyes hurt when I blinked.

“I waited for the next day in the morning and my eye felt worse, I went to work and I had to leave work because of the pain I felt.

"I sent a message to the girl explaining the situation and she told me that it was normal for me to wait two to three days.

Concerned about her eyes and the increasing burning sensation, Samantha decided to see her doctor.

She was shocked by what the medical professional told her.

Samantha said: “The doctor told me that if I had done that [waited a few days] I could even lose my sight.

She wanted to get her eyes professionally done for her graduation
(

"The doctor prescribed me some antibiotic drops and told me to go and remove them.

"I had already taken an eyelash application course so I knew it was not normal but I wanted to give the girl a chance.

“I went to remove them with the girl who had given me the course and she told me that the other [lash tech] did a bad job.

"It was the responsibility of the girl to return all my money and what I paid from the doctor since her application and technique were wrong, it was not my fault."

Samantha also shared some advice on how to apply fake eyelashes, saying they must be at least "2mm separated from your skin".

Samantha explains what happened with having the false eyelashes applied
(

She says she was almost left blind by the treatment
(

One person could barely watch the clip saying: "Just seeing it, my eyes started to hurt XD". [sic]

Another feared the woman's graduation photos would be ruined saying: "And close to graduation, it's the worst."

Another user noted the lashes were "very close to the skin" during the treatment.

One person observed how common the problem was saying "I've seen so many with the same problem."

One person said "Ugh, what a pain." after seeing the before and after clip.

Previous : Toddler survives fire that killed his mum and left him with burns to 95% of his body – World News
Next : Latest attempt to ban sick trophy hunting imports welcomed by campaigners