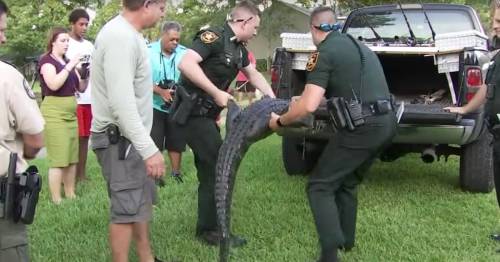 A woman was hospitalised after being mauled by an alligator – while she tried to protect her dog.

The seven-foot reptile struck as the 43-year-old woman walked her pet in Palm Harbor, west of Tampa, Florida.

It happened in front of stunned witnesses on Tuesday evening.

She was rushed to hospital with serious injuries after the alligator bit her right leg, the Florida Fish and Wildlife Conservation Commission said (FWC).

Greg Vance, who saw the terrifying attack unfold, said the alligator had tried to grab the woman's dog.

She responded by grabbing her pet, but slipped as she tried to get away, he said. 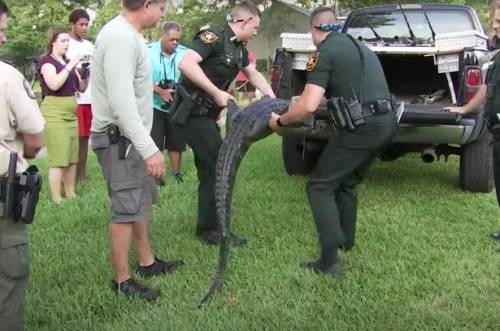 The alligator was captured and relocated following the attack in Florida
(Image: FOX 13 Tampa Bay)

Mr Vance told Fox 13 : “I was walking my dog and all the sudden I looked back and I see this lady kinda falling by the lake a little bit and apparently she was walking her dog close to the edge of the lake.

“It looked like the gator tried to get the dog but she grabbed the dog really quick, but in turn, she slipped down and the gator got her leg just underneath the knee…

"It was like one chomp and then he went back into the water."

He said he had seen the alligator in the area before, sitting on the grass, and had been cautious not to go anywhere near it.

"It’s a pretty big gator, matter of fact I’ve seen him walking a couple times so I always try to avoid being in that area, any place close to the water because it happens," he said. 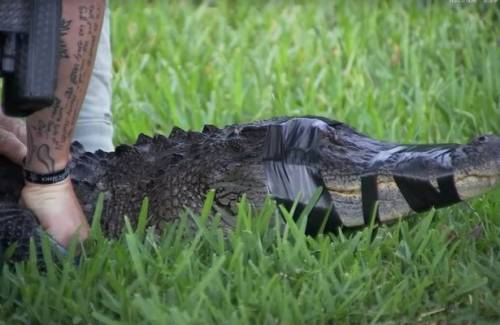 The huge reptile bit the woman's leg as she tried to escape with her dog
(Image: FOX 13 Tampa Bay)

In a statement the FWC said such attacks are rare.

The statement said: “Relocated alligators nearly always try to return to their capture site. In the process of returning, they can create problems for people or other alligators along the way.

“If an alligator successfully returns, capturing it again would be necessary and usually more difficult the second time.”

The huge animal was trapped by an alligator trapper.

Previous : Nigeria’s Buhari tells youth to ‘behave’ if they want jobs
Next : Couple remarry as ‘bride and bride’ after groom comes out as transgender