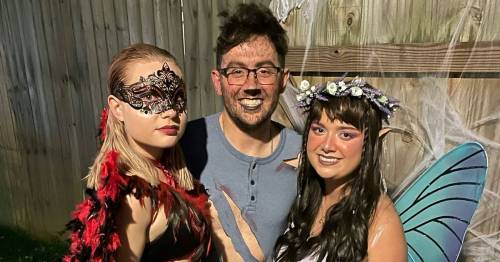 A woman in a 'throuple' wants a marriage with both her fiancé and an old college flame.

The couple invited Sam Vick, an old college flame of Angel, into their relationship in April last year.

Angel and Sam, 23, had shared a one-off kiss after they met at college.

Their fling was reignited at a festival and they became intimate with Tyler in May 2019.

They decided to become a throuple as their feelings grew and became involved in a relationship between all three of them.

They dated on two separate occasions when they first got together but couldn’t make it last longer than two weeks.

Surrey Live reports that they decided to give their relationship another go in April 2021 and have now invited Sam to move in.

Despite the three-way relationship the Angel and Tyler are getting married in May 2022, but hope it will be possible for Sam to marry them too in the future.

Angel, a banking mortgage warehouse operations specialist from Arkansas, US, said: “All three of us went to the festival and just with the music and maybe a little bit of alcohol involved Sam and I just started kissing.

"And then Tyler was like: 'Well, that's pretty cool.' “It just kind of developed from there.

“We were scared to open up to each other, it’s intimidating to add a whole other person into your life that you can depend upon. I was being selfish but have worked through my jealousy.

Angel and Sam were friends during their college years – the friendship started when Angel invited Sam to a party and the girls kissed but remained platonic.

Sam, a bank clerk, from Jonesboro, Arkansas, US, said: “We both were exploring our sexuality at this point and were beginning to learn we didn’t just like kissing girls when we were drunk.”

After meeting on Tinder, Angel and Tyler had always spoken about being open to try new things in their relationship.

Angel and Tyler are getting married this month, but hope it will be possible for Sam to marry them too in the future
(

In May 2019, Angel, Tyler and Sam went to Hangout Festival, Alabama, US, as part of a big group of friends.

The trio split off from the group to go and watch a different band.

Drunk and reigniting their old flame, Angel and Sam started getting it on – Tyler joined in, and things progressed when they got back to the Airbnb.

Tyler, a ramp agent, from Memphis, Tennessee, US, said: “We thought it was a one-time thing.” Angel added: “But we all caught feelings.”

Things haven’t always been easy for the three-way couple, they tried dating on two separate occasions two years ago but couldn’t make it last longer than two weeks.

Angel said: “I had never dated girls before. So, it was difficult discerning friendship feelings from relationship feelings.

“I knew it was different because it felt wrong when she wasn’t with me, and I missed her like you miss a partner.

“For Sam it was difficult to join Tyler and I who had already been established for a whole year."

In April 2021, the trio decided to give it a proper shot in a relationship together.

At the beginning, Tyler struggled fitting in two girlfriends around his work schedule and Angel struggled seeing Sam with her boyfriend.

“I was being selfish but have worked through my jealousy. But now we all go on dates.

“Sam and Tyler go to the zoo while I’m at work.”

Sam currently lives a one-and-a-half-hour drive from Tyler and Angel, so is only with them for three days a week.

But in April 2022, Sam is taking the plunge to move into the couple's two-bedroom home in Memphis, Tennessee, US.

The three have never lived with each other for more than three days at a time but can’t wait to be together.

Angel said: “Sam and I will share the bed Monday to Friday while Tyler is at work, he sleeps in another room.

In the bedroom, often they don’t all have sex together, but they take it in turns.

Previous : Canelo Alvarez vs Dmitry Bivol purse and prize money for world title fight
Next : West Indies legend Chris Gayle hits out at IPL over ‘lack of respect’ as he explains snub