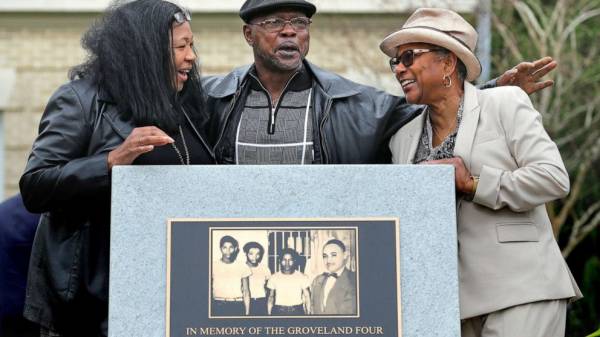 A judge in Florida posthumously exonerated four Black men, known as the “Groveland Four,” who were falsely accused of raping a white woman in the central Florida town of Groveland in 1949.

Their families have been fighting to clear their names for decades, and in October, Florida State Attorney Bill Gladson filed a motion to posthumously clear the “Groveland Four” of their criminal records after the state determined that the evidence against the men was falsified.

Charles Greenlee’s daughter, Carol Greenlee, told ABC News that knowing her father has been exonerated has cleared a “cloud” that has followed her for 72 years.

“All my life I’ve been waiting to hear those words: ‘Restore presumption of innocence,'” she said.

“Even a casual review of the record reveals that these four men were deprived of the fundamental due process rights that are afforded to all Americans,” Gladson wrote in the motion that was heard in court Monday morning. “The evidence strongly suggests that a sheriff, a judge and prosecutor all but guaranteed guilty verdicts in this case.”

State Library and Archives of Florida via AP/FILELake County Sheriff Willis McCall and an unidentified man stand next to Walter Irvin, Samuel Shepherd and Charles Greenlee, from left, in Fla. The three men along with Ernest Thomas were charged with rape in 1949. Gov. Ron DeSantis granted posthumous pardons to the four men on Jan. 11, 2019.

Following the rape accusation in 1949, an angry mob shot and killed Thomas before he could be arrested. Charles Greenlee, Shepherd and Irvin were all put to trial and convicted.

Charles Greenlee was given a life sentence. Irvin and Shepherd were sentenced to death and successfully made an appeal. In 1951, the U.S. Supreme Court vacated their convictions and ordered a new trial for each. Following the new indictment, a Florida sheriff, Willis McCall, shot and killed Shepherd and attacked and injured Irvin.

Records show that the indictment against Thomas and Shepherd were never dismissed by the court, according to Gladson’s motion.

Irvin was retried, convicted and again sentenced to death, but later had his sentence commuted to life in prison.

Following the hearing, Gladson addressed reporters in a press conference and was joined by family members of the Groveland Four.

The first of the family members to speak was Carol Greenlee, who broke down in the court when the judge announced her father’s name would be cleared.

“This is a day that God has made,” she told reporters and thanked everyone who has helped her along her journey to fight for her father.

Carol Greenlee, who is 72, is just as old as the case of the Groveland Four. She was born a few months after her father was wrongfully imprisoned for rape.

Charles Greenlee, who was only 16 at the time, received a recommendation of mercy from the jury and received a life sentence instead of a death sentence. He did not appeal the verdict, but he was released on parole when his daughter was 11 years old. He died in 2012.

Orlando Sentinel/TNS via Getty ImagesRelatives of the Groveland Four gather at the just-unveiled monument in front of the Old Lake County courthouse in Tavares, Fla., Feb. 21, 2020. Gov. Ron DeSantis, elected officials, and community leaders participated in the unveiling ceremony, honoring the four men who were falsely accused of rape in 1949. From left, Vivian Shepherd, niece of Sam Shepherd; Gerald Threat, nephew of Walter Irvin; Carol Greenlee, daughter of Charles Greenlee.

In an emotional interview with ABC News, Carol Greenlee, who said she took on the fight to clear her father’s name because he didn’t appeal his conviction, reflected on the “hole” in her life that the Groveland Four case has left and how it impacted her relationship with her father.

She said that she grew up visiting her father in prison until she was 3, when he asked her mother not to bring her back because it was “too painful.” But he continued to send her things from prison and didn’t miss a birthday card, she said.

Carol Greenlee said it took her years to understand the story of the Groveland Four and why her father didn’t want to see her.

“As a child, I would play in the courtyard while they talked and this one particular Sunday, he told her not to bring me back,” she said. “And that gave me a sense of being rejected, not being wanted. For a long time, I couldn’t understand. I didn’t do anything wrong.”

Carol Greenlee said that the charges against her father made her feel “guilty” growing up, and she felt like “other children that knew about it looked at me in a very strange and unforgiving way, that I was dirty.”

But as she got older, she learned more about what happened to the Groveland Four, and when she was 40 years-old, she finally asked her father and heard the story from him for the first time.

“I decided that in order to get rid of this hole that was inside of me that nobody could fill, that marching on picket lines couldn’t fill that, that everything that I did could not fill that hole — the desire to know more about my father,” she said.

Octavio Jones/Reuters, FILEA monument to the “Groveland Four” honoring the four men who were falsely accused of rape in 1949, is pictured in front of the Lake County Historical Society Museum in Tavares, Fla., July 7, 2020.

Carol Greenlee said she can now begin to heal spiritually, because this journey has taught her that “hate destroys you from within, anger tears you apart.”

“But compassion, forgiveness, and hope builds you up. And as long as you got hope, you can look forward,” she added.

When asked how she wants the world to remember her father, she said, “I want the world to know Charles Greenlee as a compassionate, loving family man who cares dearly about his children and wants to protect them at all costs.”

Other family members who spoke at the press conference on Monday included Dr. Beverly Robinson, the cousin of Samuel Shepherd; Eddie Irvin and Gerald Threat, nephews of Walter Irvin; and Aaron Newson, the nephew of Ernest Thomas.

Author Gilbert King — who won a Pulitzer prize for “Devil in the Grove,” his 2012 book about the Groveland Four — also spoke following the hearing. He was joined by Thurgood Marshall Jr., the son of the late Supreme Court justice who represented Irvin in the trial.

Marshall Sr. was with the NAACP at the time before becoming the Supreme Court’s first Black justice. His son said the case always haunted his father.

Previous : Justice Department settles with Parkland victims’ parents in lawsuit over FBI negligence in school shooting
Next : Prince William beams as he arrives to announce winners of Tusk Conservation Awards