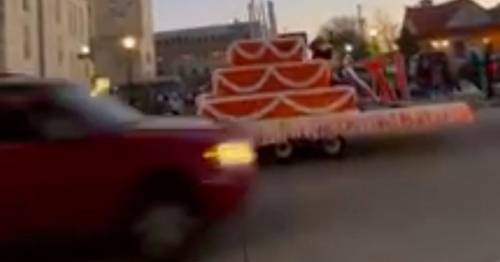 This terrifying new footage shows the moment an SUV speeds past families before ploughed into a Christmas parade and killing five people on Sunday.

Crowds had gathered in Waukesha, Wisconsin for the festive event when the horror unfolded.

More than 48 people were injured as the red SUV careered into families who had lined the streets.

A mum filmed the terrifying scenes while she attended the festive parade with her three-year-old daughter and two sisters.

She told The Sun : "All of a sudden, I hear people screaming and running, I look up and everyone's running and someone's saying ‘he got a gun’ and everyone starts bolting towards the front door of my sister's complex. It was just sheer panic."

Police said on Monday they do not know what caused Brooks to drive into the crowd.

The FBI is assisting local police in their investigation.

Witnesses recalled how the horror unfolded before them.

Resident Brian Hoffman, 33, said: "It was terrifying."I saw children who were ran over. I am still totally shocked."

The Children's Wisconsin hospital officials said at a briefing they treated 18 children, including six who remained in critical condition and three in serious condition on Monday. The rest were in fair condition or released. The hospital made no mention of any fatalities.

Darrell Brooks poses for a booking photo at the Milwaukee County Jail in Milwaukee, Wisconsin
(

Among the victims were some members of the Milwaukee Dancing Grannies, a troupe of women aged 50 to 70-plus.

They wrote on Facebook on Monday confirming several “grannies” had died.

The post read: "Those who died were extremely passionate Grannies.

"Their eyes gleamed…..joy of being a Grannie. They were the glue….held us together.”

Among the injured from Sunday's tragedy are members of a youth dancing troupe, The Waukesha Xtreme Dance Team.

Corey Montiho, a School District of Waukesha board member, said that his daughter was on a dance team that was hit, but it is currently unclear if he was referring to a different one.

He told the Milwaukee Journal Sentinel : "There were pom-poms and shoes and spilled hot chocolate everywhere.

“I had to go from one crumpled body to the other to find my daughter. My wife and two daughters were almost hit."

Details of their condition have yet to be released, but the team has thanked those who checked in.

“At this time, we ask that the media and those reaching out, give us and our families time and privacy to process the tragic events of this evening.”

Previous : What would close during Covid Plan B and what would remain open?
Next : U.S., Turkey agree on terms to end digital services tax, trade retaliation-Treasury