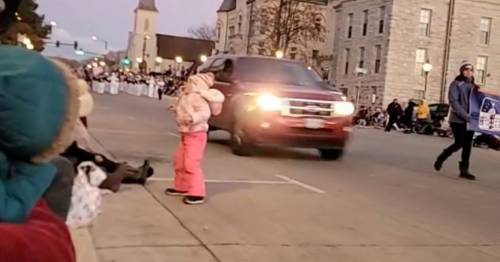 An out-of-control car raced through a dance team of young girls during a terrifying incident that saw five killed on Sunday afternoon.

Onlookers watched in terror as a red SUV ploughed through a parade in Waukesha, Wisconsin, claiming five lives and injuring more than 40 people.

Alarming witness accounts detail a dance team of young girls "between nine and 15-years-old" who may have been hit by the car.

One witness said as many as 20 members of the Waukesha Xtreme Dance Team had been struck by the vehicle, Fox 6 Now reporter

Corey Montiho, a School District of Waukesha board member, said that his daughter was on a dance team that was hit, but it is currently unclear if he was referring to a different one.

“There were pom-poms and shoes and spilled hot chocolate everywhere,” the dad told the Milwaukee Journal Sentinel

People at the parade watched as the car sped into people
(

“I had to go from one crumpled body to the other to find my daughter. My wife and two daughters were almost hit."

Mr Montiho said while his family is safe, he held one little girl's head while blood came out of her ears and she had a seizure.

The number of members of the dance squad injured is not currently clear.

“At this time, we ask that the media and those reaching out, give us and our families time and privacy to process the tragic events of this evening.”

More than 40 people are believed to have been injured
(

A dented red SUV was later photographed parked by a house
(

Footage posted on social media showed a red vehicle speeding into the road where the parade was taking place after breaking through barriers.

A group of what appeared to be teenage girls dancing with white pompoms and wearing Santa hats can be seen in another video.

The person filming shouts "Oh my God" several times before the vehicle ploughs into the group.

"(The driver is) just blowing through people, kind of just dinging a lot of people, bodies flying everywhere,” Kowalski said.

"These people didn’t get run over, they got f*****g thrown through the air. Like a lot of people got tossed up into the air.”

The scene of the crashes was cordoned off by police
(

Chief of Waukesha Police Dan Thompson said a "person of interest" is in custody.

The Archdiocese of Milwaukee spokeswoman Sandra Peterson said a Catholic priest, multiple parishioners and Waukesha Catholic schoolchildren were among those injured.

Many people caught the collision on film
(

Mr Thompson said the investigation is ongoing and that a "suspect vehicle" has been recovered.

The Milwaukee Dancing Grannies, which had people taking part in the parade, posted on its Facebook page that "members of the group and volunteers were impacted and we are waiting for word on their conditions."