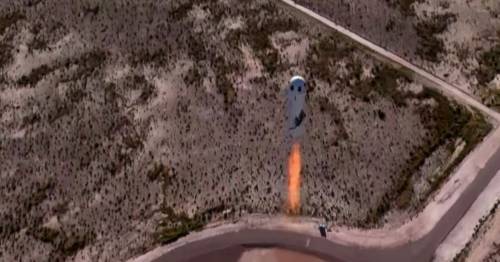 William Shatner has officially become the oldest person to ever go into space as he blasted off.

The 90-year-old actor and his crewmates took off aboard the white 60-foot-tall New Shepard spacecraft at Blue Origin's launch site about 20 miles outside the rural west Texas town of Van Horn.

The four crew members, all wearing blue flight suits with the company's name in white letters on one sleeve, climbed into a vehicle with Bezos at the wheel to take them to the launchpad ahead of the scheduled liftoff time after a bit of a delay.

They blasted into space amid light winds and clear skies at 9.50am local time (3.50pm UK time) after Bezos himself closed the hatch of the New Shepard capsule.

The four astronauts experienced about three to four minutes of weightlessness and travelled above the internationally recognised boundary of space known as the Karman Line, about 62 miles (100 km) above Earth.

According to a live stream of the historic event, Shatner and his fellow passengers reached an altitude of roughly 350,000ft and a velocity of about 2,000mph.

The crew capsule returned to the Texas desert under parachutes, raising a cloud of dust, after a trip lasting about 10 minutes.

The capsule returning back to Earth

The astronauts were not required to wear helmets, with Blue Origin saying it wanted its passengers to have an unencumbered view of space.

Blue Origin had a successful debut space tourism flight on July 20, with Bezos and three others aboard, flying to the edge of space and back on a trip lasting 10 minutes and 10 seconds.

On that flight, pioneering female aviator Wally Funk became the oldest person to reach space at the age of 82.

That record has now been broken by Shatner, who said he was a "little frightened" but "excited" ahead of the launch.

Shatner said he was excited for the launch
(

The actor was emotional after going into space
(

"But I've got to think that once it's done, once I've been into space and seen the universe and seen our Earth and the contrast between that hostility and this warmth, and how important it is to keep the Earth alive so that we don't wreck it, we human beings don't wreck it, that contrast in all of that is so dramatic to me."

William Shatner and his crewmates ahead of their take-off
(

The flight represents another important day for the nascent space tourism industry that, according to UBS, could reach an annual value of $3 billion in a decade.

The flight, previously scheduled for Tuesday, was pushed back a day for wind-related reasons.