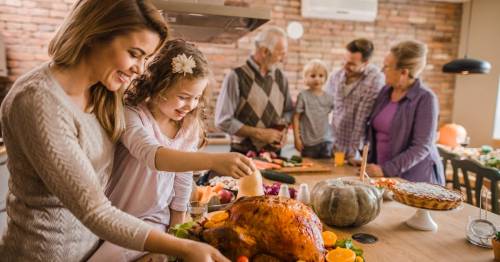 When is Thanksgiving 2021? Meaning behind US holiday and how it’s celebrated

Marking the official countdown to Christmas and New Year, Thanksgiving is consider a national holiday in the US. It is also celebrated in other countries like Canada, Germany, Brazil and Japan.

Celebrated as a way to say thanks as well as recognise the sacrifices and blessings of the past year, the origin of Thanksgiving goes back to the 1600s, when a ship called the Mayflower left its dock in England carrying 102 pilgrims seeking a new home where they could freely practice their faith.

These pilgrims were drawn to America and in 1621 they shared a harvest feast with the Wampanoag Native Americans who lived on the land with them. This celebration in modern-day Massachusetts became the first-ever Thanksgiving celebration.

Thanksgiving is typically celebrated on the fourth Thursday of November
(

Here's everything you need to know about Thanksgiving 2021.

Thanksgiving is traditionally celebrated on the fourth Thursday of November in the US. This means that this year it takes place on Thursday 25 November. In Canada, it’s celebrated on the second Monday of October and it fell on October 11.

How is Thanksgiving celebrated?

Food is the most important part of Thanksgiving. From turkey to mashed potato, pumpkin pie and cranberry sauce, a feast is definitely what makes for a good Thanksgiving.

Parades are also a big part of the holiday in the US. One of the country’s largest parades is the Macy’s Thanksgiving Parade in New York City, which attracts more than two million spectators every year.

Another tradition sees the President “pardoning” a live Thanksgiving turkey every year, sending them to a farm instead of allowing them to be slaughtered.

On the flip side, many Native Americans and protesters instead mark the holiday as a "National Day of Mourning" to commemorate those who lost their lives at the hands of the foreign settlers when America was colonised.

How to wish someone a Happy Thanksgiving?

If you want to send someone warm Thanksgiving blessings. Here are some messages you can send :

"May you enjoy a bountiful Thanksgiving, a joyous holiday season and healthful, Happy New Year."

"One of the joys of Thanksgiving is wishing you a happy and healthy holiday season."

"Because today is a special day, I want to let you know that I appreciate you every single day. Happy Thanksgiving wishes."

"Hope that you’re surrounded with the love of your dear ones on this festive season. Happy Thanksgiving to you and yours."

Previous : Bus fire that killed 46 including 12 kids ’caused by smuggled fireworks and oil onboard’ – World News
Next : Man ‘kills man by running him over’ in Marks and Spencer car park row