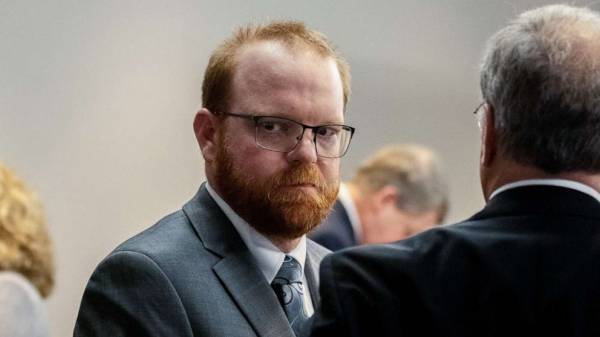 Even with verdicts handed down in the murder trial of three men for the death of Ahmaud Arbery, court proceedings are still ongoing for the defendants.

On Wednesday, Travis McMichael, who fatally shot Arbery in February 2020, was convicted by a Glynn County, Georgia, jury on all nine charges, including malice murder and four counts of felony murder.

His father, Gregory McMichael, was found not guilty of malice murder but was convicted on all other charges, including four counts of felony murder.

Their neighbor, William “Roddie” Bryan, who recorded the incident on a cellphone, was found guilty on six charges, including three of the felony murder counts.

Here’s a look at what’s next for the three defendants in the Glynn County case — as well as several others connected to Arbery’s killing.

Stephen B. Morton/Pool via Getty ImagesSuperior Court Judge Timothy Walmsley is handed the jury’s verdict during the trial of Greg McMichel and his son, Travis McMichael, and a neighbor, William “Roddie” Bryan in the Glynn County Courthouse on Nov. 24, 2021, in Brunswick, Ga.

A sentencing hearing has yet to be announced by Superior Court Judge Timothy Walmsley.

Speaking with reporters Wednesday, lead prosecutor Linda Dunikoski said the guilty verdicts carry mandatory sentences of life in prison, but with a possibility of parole.

Attorneys for the defendants have said they plan to appeal the guilty verdicts, which they can begin once sentencing is done. Jason Sheffield, one of the attorneys for Travis McMichael, told reporters Wednesday that a change of venue “could certainly become a part of the appeal.”

All three men are also facing federal charges for the killing of Arbery. That’s after a federal grand jury charged them with hate crimes and attempted kidnapping in April in a case unrelated to the state’s trial.

They each were charged with one count of interference of rights and attempted kidnapping, while the McMichaels were also charged with using, carrying and brandishing a firearm in relation to a crime of violence.

The federal indictment alleges that the three men intimidated and threatened Arbery and interfered with his right to use a public street “because of Arbery’s race and color.” It also alleges that all three chased Arbery “in an attempt to restrain [him], restrict his free movement, corral and detain him against his will and prevent his escape.”

Robert Rubin, an attorney for Travis McMichael, had expressed disappointment in the indictment, saying at the time that “there is absolutely nothing in the indictment that identifies how this is a federal hate crime.”

Bryan’s attorney, Kevin Gough, also said at the time that his client had “committed no crime” and that they “look forward to a fair and speedy trial.”

On the one-year anniversary of his death, Arbery’s mother filed a wrongful death lawsuit in Georgia Southern District Court against the McMichaels and Bryan, among others. It alleges the three men were acting as surrogate police when Arbery was killed.

Court proceedings are still ongoing in the suit, which demanded a jury trial.

In response to the lawsuit, Rubin said, “Obviously, the plaintiff lawyers are seeking a substantial sum of money from any party they think has deep pockets. I don’t expect Travis McMichael will give them the money they are seeking.”

Gough also said at the time of the filing that the suit “will show Mr. Bryan acted within the law.”

Beyond the McMichaels and Bryan, a former district attorney was indicted by a Glynn County jury in connection with the killing of Arbery for allegedly interfering in the investigation of the fatal shooting.

In September, former Brunswick District Attorney Jackie Johnson, the first prosecutor to get the case, was charged with violating her oath of office for allegedly “showing favor and affection” to Gregory McMichael during the investigation, according to the two-count indictment.

Gregory McMichael is a retired investigator with the Brunswick District Attorney’s Office and a former Glynn County police officer.

Johnson was also charged with obstructing a law enforcement officer by allegedly “directing that Travis McMichael should not be placed under arrest,” the indictment said.

Johnson, who lost a reelection bid in November 2020, has pleaded not guilty to the charges in the ongoing case.