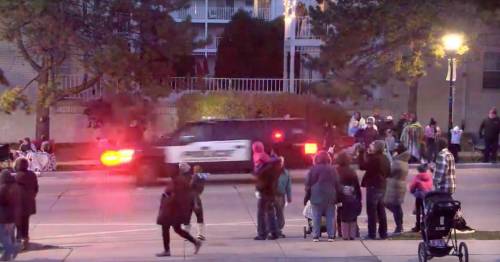 A car has reportedly crashed into a Christmas parade in the US, leaving multiple people injured.

Sources told CBS 58 that the event in Waukesha, Wisconsin, is currently being evacuated after reports of gunshots and a speeding vehicle.

At least seven people walking through the parade were hit and injured by a red SUV, according to Waukesha Freeman newspaper.

One man at the scene told a reporter that 'most of his family' had been hospitalised, however he and his wife walked away.

One witness said she saw people lying on the ground injured after a car raced through 'downtown Waukesha', while another described how the vehicle 'ploughed through people'.

In an unverified video shared on social media a red 4×4 can be seen smashing through a barricade as the sound of gunshots ring out in the background.

A live stream of the parade also shows what appears to be the same vehicle racing down the street, shocking onlookers on either side of the road.

Shortly after SUV passes the crowds, police vehicles seemingly in pursuit drive past with their sirens blazing.

Witness Angelito Tenorio told the Milwaukee Journal Sentinel: "We saw an SUV crossover, just put the pedal to the metal and just zooming full speed along the parade route.

"And then we heard a loud bang, and just deafening cries and screams from people who are who are struck by the vehicle."

Another witness wrote on Facebook: "I’m safe but a car just ploughed through people at the Waukesha Christmas parade right in front of us. shots fired and we’re inside a shop hiding."

Another person tweeted: "A car just ran through the middle of a downtown Waukesha.l parade. Multiple people on the ground injured.

"Heavy police and ambulance presence now. Tons of families with children running to their cars to leave the scene."