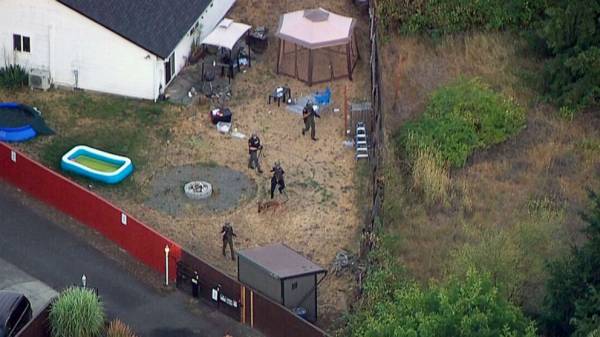 Washington state deputy shot and killed in the line of duty

A Washington state sheriff’s deputy was shot and killed in the line of duty Friday night as police launch a search for suspects.

The deputy involved in the shooting that unfolded around 7 p.m. has not been named.

Clark County Sheriff Sgt. Brent Waddell said in an initial press conference the deputy was hospitalized after being “seriously injured,” but by 11:30 p.m. the department announced the officer died.

Waddell said there were “multiple suspects” involved in the shooting and they may be “armed and dangerous.”

KATULaw enforcement search the backyard of a home in pursuit of three suspects in the fatal shooting of a Clark County, Wash. Deputy Sheriff in Vancouver, B.C., Canada, July 23, 2021 .

Two persons of interest have been detained and a search is ongoing for a third person of interest, Vancouver Police, which is handling the investigation said Saturday, according to The Columbian.

Officials did not offer details about the circumstances under which the deputy was shot.

Police were involved in a standoff with someone at a Vancouver apartment complex late into the night, local ABC affiliate KATU reported.

Several police departments searched for suspects in the area of Interstate 205 near Northeast Padden Parkway well into the night.