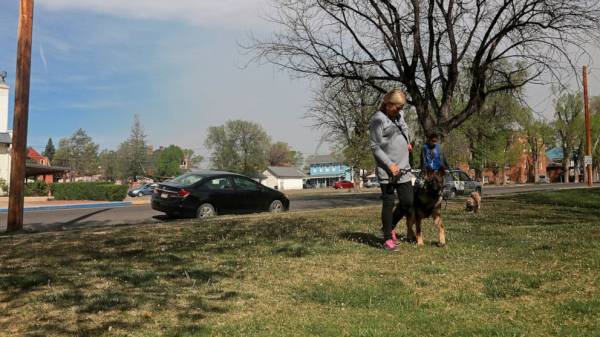 LAS VEGAS, N.M. — Weather conditions described as potentially historic were on tap for New Mexico on Saturday and for the next several days as over 1,400 firefighters and a fleet of airplanes and helicopters worked feverishly to bolster lines around the largest fire burning in the U.S.

Many families already have been left homeless and thousands of residents have evacuated due to flames that have charred large swaths of the Sangre de Cristo Mountains in northeastern New Mexico.

Residents on the fringes of the shifting fire front were holding out hope that all the work done over recent days to clear brush, install sprinklers, run hose lines and use bulldozers to scrape lines will keep the fire from reaching the small city of Las Vegas and other villages to the north and south.

“There’s uncertainty and there’s fear about how the winds are going to affect the fire from day to day,” said Elmo Baca, chairman of the Las Vegas Community Foundation. “Once the people are evacuated out of an area, they can’t go back, so they’re just stuck worrying.”

Las Vegas was like a ghost town earlier in the week, with restaurants and grocery stores closed, schools closed or pivoting to remote-only options, and the tourist district empty but for resting firefighters.

By Saturday, after the days of work to protect the city of 13,000, some businesses had reopened as residents remained apprehensive while trying to return to something resembling regular life.

At a park next to the library, four dog owners took a dog obedience class under a full gray sky. They included one whose daughter had persistent headaches from wildfire smoke and another whose husband was a construction worker whose work sites had all turned to ash.

The recent work by fire crews to protect Las Vegas was “looking really good” but continued Saturday, said Todd Abel, a fire operations official. “We want to make sure this is all going to hold.”

The blaze, now a month old, has blackened more than 267 square miles (691 square kilometers) — an area larger than the city of Chicago.

The April 6 start of the conflagration has been traced in part to a preventive fire initiated by the U.S. Forest Service to reduce flammable vegetation. The blaze escaped control, merging with another wildfire of unknown origin.

Nationwide, close to 2,000 square miles (5,180 square kilometers) have burned so far this year, with 2018 being the last time this much fire had been reported across the country, according to the National Interagency Fire Center. And predictions for the rest of the spring do not bode well for the West, where long-term drought and warmer temperatures brought on by climate change have combined to worsen the threat of wildfire.

Incident Commander Dave Bales said firefighters working in northeastern New Mexico have been focused on protecting homes and other structures that hold generations of sacred memories.

“It’s hard when I see so many people displaced,” he said, noting that many hugs have been shared around town.

The crews have seen extreme wind events before that usually last a day, maybe two. But Bales said this event could last five or more days with gusts topping 50 to 60 mph (80 to 96 kph). He also warned that flames could be carried up to a mile away.

“This is an extreme wind event that is unprecedented,” Bales said.

Another large wildfire burning in New Mexico was within 5 miles (8 kilometers) of Los Alamos National Laboratory, one of the nation’s key facilities for nuclear research and future production of plutonium components for nuclear weapons.

Crews have burned vegetation ahead of the fire in an effort to reduce its intensity and the potential for spot fires. At the lab, water tankers, a helicopter and heavy equipment are in position and firefighters will patrol the perimeter if flames gets closer.

Lab officials said Friday that radiological and other potentially hazardous materials are stored in containers engineered and tested to withstand extreme environments, including heat from fire.

This story has been updated to correct the name of fire official Todd Abel.