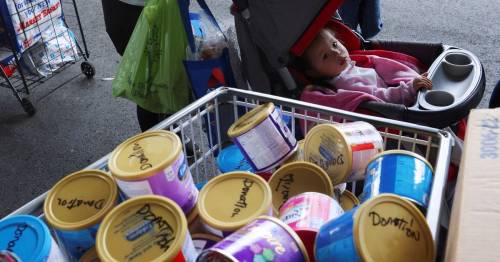 Two mums fought over baby formula as one "stripped the shelves bare" when she filled up her shopping trolley.

The selfish woman was confronted by another mum as she was loaded her trolley with baby formula.

Their dispute was videoed and published on TikTok as one mum tried to hold the other to account.

The anonymous woman's face could not be seen – but more than 30 bottles of baby formula were loaded inside her shopping.

It happened as a Target store in Massachusetts, New England, with the selfish act attributed to fears over a nationwide with a shortage of baby formula in the US.

The video was posted on TikTok by @Chopnedits and prompted a rash of comments in response to the woman's actions.

"You have a full cart! Look at all this!" the woman says spotting the full trolley.

"Look at the shelves. You don't think I need it for my baby too?"

Baby formula is ready for distribution at a food pantry run by La Colaborativa in Chelsea, Massachusetts, US
(

The other mother responds: "You think I knew you were going to come and get this one?"

"You just cleared the whole shelf of all of this formula," she responds.

'"We took it because I am paying for it!" a retort comes back from her fellow shopper.

'"And I'm not paying for?' the complainer responds. "I have a child at home and you just cleared the whole shelf".

'"This is the whole reason why there's a formula shortage. You've taken all the formula off the shelf and bought it all at once!

"There's kids who need formula today who won't be able to get it because you just bought it to stock up."

A woman who took all the formula then moves on with her shopping.

But she is called after: "That's not your problem, right?"

Baby formula is in short supply across the US
(

The row sparked a host of comments on social media.

Scarlette Rogue wrote: "The store should limit the amount each person can buy."

It was also suggested the woman had snapped-up the baby formula to sell.

Tyasha Dixon added: "There should be a limit or lock it up like Walmart does.

Laurielovesmolly wrote: "Why hasn’t Target put a limit on the amount one person can purchase?

"I was at a Walgreens’s in Milwaukee and the formula was behind the counter."

But Rivera Miranda in defended the woman's actions: "The shortage is because of all the recalls let’s stop blaming parents for being smart and stocking up when it’s available."

The US administration on Wednesday attempted to resolve the baby formula crisis.

A bill was passed by the House of Representatives to provide $28million in emergency aid.

Republicans, however, said the legislation shielding the administration's "ineptitude" during the crisis.

Previous : UK monkeypox cases double in a DAY as disease spreads across the globe
Next : Family’s hell as mould infests every room of ‘disgusting’ flat and spreads to furniture