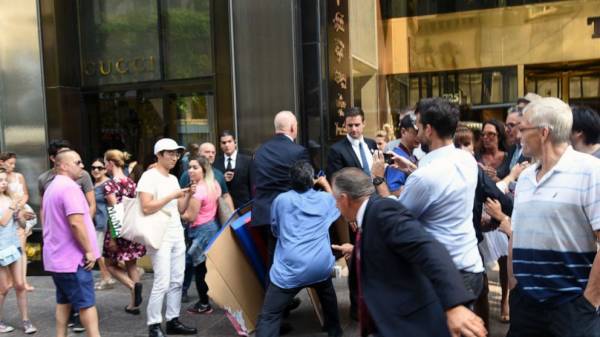 Trump must give videotaped deposition in protest lawsuit, judge orders

Former President Donald Trump must sit for a videotaped deposition next week as part of a lawsuit involving his anti-immigrant rhetoric, a judge in the Bronx ordered.

A group of Mexican protesters said they were assaulted during a rally outside Trump Tower in September 2015 over the then-candidate’s comments that Mexican immigrants were criminals and rapists.

The lawsuit named Trump, his campaign, his former head of security Keith Schiller, and others.

“Donald J. Trump shall appear for a deposition October 18, 2021 at 10 a.m. … or, in the event of illness or emergency, on another mutually agreed to date on or before October 31, 2021,” Judge Doris Gonzalez’s order said.

Trump faces the prospect of another deposition by the end of the year as part of a defamation lawsuit filed by former “Apprentice” contestant Summer Zervos, who alleges that Trump sexually assaulted her at the Beverly Hills Hotel in 2007, which Trump denies. Zervos claims that Trump defamed her during his campaign when he said she lied about the alleged assault.

Trump has also denied the allegations by former Elle columnist E. Jean Carroll, who is suing him for defamation after he accused her of lying about an alleged 1990s rape in a dressing room at Bergdorf Goodman.

Trump’s tax filings and business practices are also under criminal investigation by the district attorneys in Manhattan and New York State.

Previous : Bank of America’s prudence is at odds with times
Next : Police searching wooded area in northern Ontario for clues in 1996 missing person case