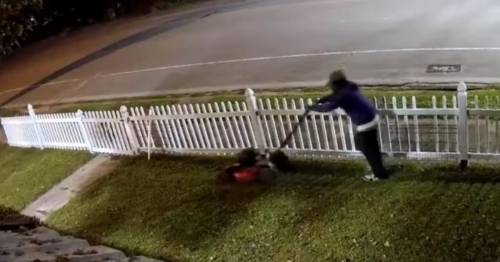 Thoughtful burglar breaks into family home, grabs lawnmower and cuts all their grass

A man accused of burglary at a family's home was caught on camera mowing their front and back lawns on CCTV before running off.

The suspect, police have named as Marcus Renard Hubbard, is accused of stealing from the home in southeast Texas.

But after breaking in he is seen on the home security video taking their petrol lawnmower out to the garden, filling it with fuel, then mowing both lawns at the front and back of the property.

He was caught on camera carrying out the bizarre chore in the middle of the night on Friday, April 1

Officers from Port Arthur Police Department arrived to find their suspect still with the lawnmower.

They say he pulled the lawnmower behind him as he tried to escape, later ditching the garden equipment in a nearby alleyway before running off.

Hubbard is now wanted for burglary of a building, with officers asking anyone with information about his whereabouts to call them.

Port Arthur Police Department share the video footage on Facebook, writing: "On 4/1/2022 Marcus Hubbard was seen on Security video burglarizing a residential building, he removed property from within the building without owners’ consent.

"He then is seen on Security video mowing the homeowners front and back yard.

"Upon officers arrival Hubbard is seen running from the area while dragging the lawnmower with him.

"He abandons the lawnmower in an alley and evades apprehension.

"Hubbard currently has an outstanding warrant for burglary of a building."

It's not the first time a thief has engaged in some household chores after breaking into a stranger's home.

In 2019 the aptly named Gavin Crim broke into a home in Tampa Bay, Florida, but rather than grab any valuables he started to cook breakfast in the resident's kitchen.

When the house's occupant woke up and found him, Crim told them to "go back to sleep".

Previous : Mum admits killing daughter, 12, and twin boys, 8, with ‘help from teenage son’
Next : Denis Shapovalov screams at Italian Open crowd to ‘shut the f*** up’ in extraordinary rant